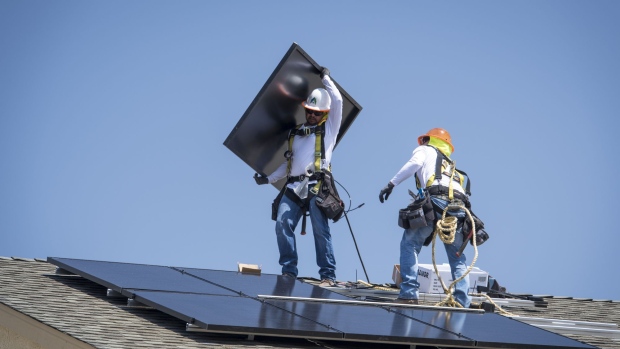 Contractors install SunRun Inc. solar panels on the roof of a new home at the Westline Homes Willowood Cottages community in Sacramento, California, U.S., on Wednesday, Aug. 15, 2018. California is the first state in the U.S. to require solar panels on almost all new homes as part of a mandate to take effect in 2020. Photographer: David Paul Morris/Bloomberg , Bloomberg

(Bloomberg) -- Loanpal, a provider of residential-solar loans in the U.S., is planning an initial public offering this year that could value the company at more than $10 billion, according to people with knowledge of the matter.

The company, which said in January it had raised more than $800 million from investors including New Enterprise Associates and WestCap Group, is working with advisers including Goldman Sachs Group Inc. ahead of a listing that’s expected to occur as soon as this year, one of the people said.

Plans for a listing, including the timing, could still change, the people said.

Representatives for Loanpal didn’t immediately respond to requests for comment. A spokesperson for Goldman declined to comment.

Solar lending has been a key tool in the surge of residential-solar installations in the U.S., which reached a record last year. Wood Mackenzie projects new highs in each of the next three years. Meanwhile, investors over the past year have clamored for stocks tied to the long-term trends of electrification and decarbonization.

The lender has said it provided more than $6 billion of capital for solar and other sustainable home improvement products since 2018.

An IPO by Loanpal could come within months of Sunlight Financial LLC, another solar-loan originator, going public. Sunlight Financial agreed in January merge with a special purpose acquisition company, or SPAC, backed by Apollo Global Management Inc. in a deal expected to close in June.