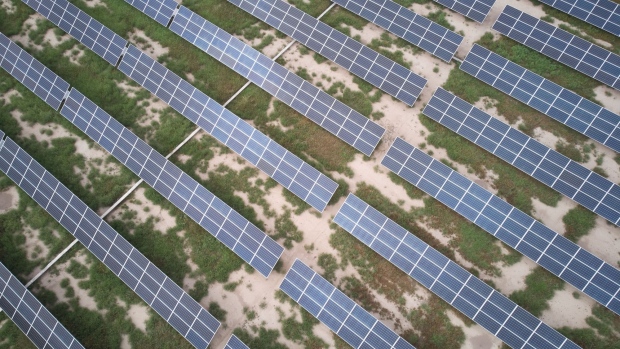 (Bloomberg) -- Jinko Solar Co. more than doubled on its first day of trading in Shanghai, giving it a massive premium to its parent’s listing in the U.S.

Jinko, the world’s second-biggest solar module manufacturer, rose to as much as 11.05 yuan a share ($1.75) in early trading, implying a market cap of about $17.5 billion. That compares to a $1.9 billion market cap for the U.S.-listed depository receipts of JinkoSolar Holding Co.

The stock rose more than 120% from the offer price of 5 yuan a share, set for the biggest increase in a debut since October 2020 for a company listing in mainland China after raising over $1 billion.

It’s the latest Chinese solar firm to see a valuation bump in its home country. Chinese investors may be more optimistic about the future of the solar sector, given the country is the world’s leader in both producing and installing panels. Meanwhile, overseas investors may be more cautious because of political and trade disputes involving China and the U.S., and more disclosure requirements stateside that could lead to delistings.

Shanghai-listed Xinjiang Daqo New Energy Co. has a market cap of $15 billion, compared to a $2.7 billion valuation for New York-listed Daqo New Energy Corp. When Trina Solar Co. delisted from the New York Stock Exchange in 2017, it was valued at $1.07 billion. It was worth more than $5 billion after its first day of trading in Shanghai last year, and is now valued at more than $23 billion.

Canadian Solar Inc. may be the next solar giant to test the mainland market after it received approval last month to list in Shanghai.