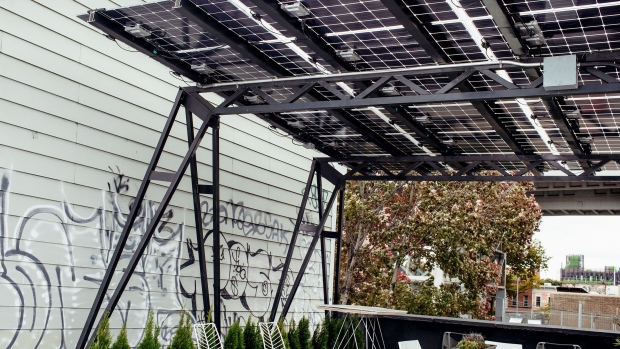 (Bloomberg) -- Solar aesthetics haven’t evolved as fast as solar tech. Sure, some panels possess a flatscreenlike sleekness, but many rooftop rigs remain bulky eyesores. Tesla Inc. has struggled to mass-produce its tiles designed to resemble classic shingles. Now, thanks to strict building codes and cramped city living, some New Yorkers have found a way to elevate the look of solar arrays: the canopy.

SITU designed the aluminum canopy with Brooklyn SolarWorks. It’s sold across the U.S., but most—about 300—are in New York City.

Unruly roof topography, fire codes, and setback rules all constrain urban solar. One way to maximize space for panels is to build up.

A 7-kilowatt canopy can generate up to 9,000 kilowatt-hours annually. That’s enough to power a home for a year or charge a Tesla Model 3 for 37,000 miles. It’s also more power than could be produced within the usable rooftop space of many New York City buildings without the canopy.

What It’s Good For

Besides providing solar power, the canopy has doubled as a shaded deck for rooftop barbecues, hot tubs, and seating for a tennis club. “Putting a canopy on the roof certainly sweetens it up,” says T.R. Ludwig, co-founder of Brooklyn SolarWorks.

Where This Is Going

A Brooklyn SolarWorks sister company has its eyes on developing solar carports for surburbia. “This is the way we’ll get into Arizona,” Ludwig says, “where they may need not a canopy but a shade structure.”