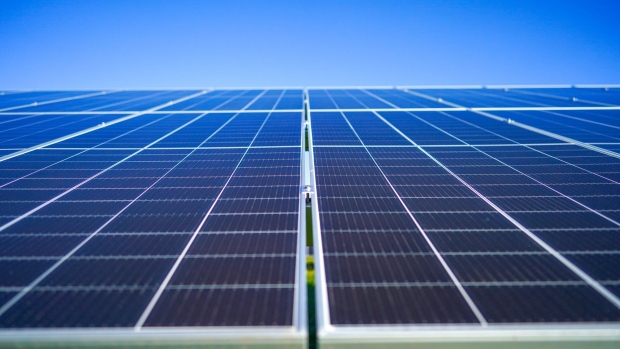 Solar panels at the British Army's first ever solar farm, part of Proect Prometheus, at the Defence School of Transport (DST) in Leconfield, U.K., on Wednesday, Sept. 29, 2021. The U.K.'s solar industry is calling on the government to triple installed capacity in the next eight years. Photographer: Ian Forsyth/Bloomberg , Bloomberg

(Bloomberg) -- Solar shares climbed Monday, shrugging off concerns that a key clean-energy provision may be stripped from the Democrats’ spending package, signaling that investors are watching tax incentives and other proposals that are likely to remain in the legislation.

JinkoSolar Holding Co., the biggest panel maker, gained as much as 4.6%, Canadian Solar Inc. climbed as much as 1.7% and the Invesco Solar ETF was up as much as 1.3%, along with the overall market.

The increase comes despite Senator Joe Manchin’s opposition to the Clean Electricity Performance Program that would encourage utilities to shift to clean energy sources like solar. Other proposals that are facing less pushback may be seen as more important to investors, according to Jeff Osborne, an analyst at Cowen & Co. The program is a major component of President Joe Biden’s plan to decarbonize the U.S. electric grid by 2035.

“Investors are focused more” on other elements of Biden’s energy plan, including extensions of wind and solar tax credits, incentives for energy storage and support for electric vehicles, Osborne said by email. Waning support for CEPP “doesn’t appear to change any of the other initiatives at play.”

The negotiations over CEPP come two weeks before Biden is expected to attend a key United Nation climate summit in Glasgow.