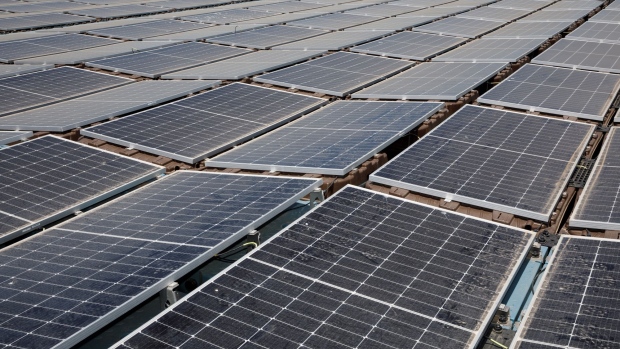 Solar panels which form part of the floating solar farm, operated by EDPR, during preparations for operational use in Alqueva, Portugal, on Tuesday, June 7, 2022. EDPR, the renewables arm of Portugal’s main utility EDP, will pay for the electricity generated at a floating solar project it bid to build in an auction, without any compensation in return. , Bloomberg

(Bloomberg) -- Solar stocks rallied Friday after the US ruled that some foreign manufacturers are evading tariffs in a decision that wasn’t quite as harsh as investors feared.

While the US Commerce Department findings could lead to duties as high as 254%, investors were anticipating tougher conditions. Four of the firms investigated were found not to have evaded tariffs, including one tied to JinkoSolar Holding Co., which soared as much as 13% in US trading. Smaller companies implicated in the probe can avoid tariffs by certifying their products are free of Chinese components, giving US developers a path to keep buying panels from Southeast Asia and help build the American industry.

“It’s a little better than expected. That’s why the stocks are up,” Joe Osha, an analyst with Guggenheim Securities, said in an interview. “There’s a sense of relief that there’s a way forward even though there will be some disruption.”

Canadian Solar Inc., a manufacturer with extensive China operations, rose as much as 7.2% in New York despite being among four firms named by the Commerce Department to have circumvented tariffs in the agency’s initial findings. Companies that are key to the construction of US projects also surged. Array Technologies Inc., a US maker of trackers for big solar farms, gained as much as 12%.