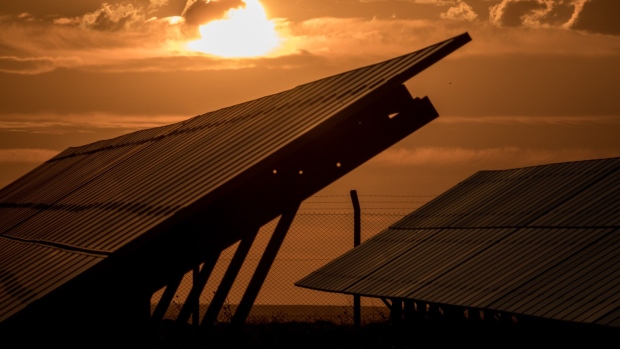 Photovoltaic panels on the Sycamore Solar Farm in Old Romney, U.K., on Monday, Oct. 26, 2020. The U.K.'s power supply buffer is set to shrink this winter compared to last year due to outages at power plants and the unexpected closure of two of Calon Energy Ltd.'s gas-fired stations after the company went into administration. , Bloomberg

(Bloomberg) -- A small Canadian hedge fund returned 116% in 2020 with bets on solar power and other clean energy stocks.

Toronto-based Vivid Capital Management, which also invests in oil and gas, has repositioned its energy fund to gain exposure to the clean energy transition since late 2019, according to a statement.

Global concern over climate change has led to a surge in investor interest for renewable energy. But favorable policy and economics may also prompt the industry to overbuild, so the fund is for now barely invested in solar stocks after “spectacular” share runs in 2020, said James Bradford, senior portfolio manager at Vivid.

“I like solar a lot” but there’s a reason it gets touted as the “solarcoaster,” he said in an interview.

Daqo New Energy Corp., which soared 460% last year, was among the fund’s holdings. The Chinese maker of polysilicon for solar power products has seen its value increase almost 10-fold since its U.S. initial public offering in 2010, with several annual share price jumps and plunges.