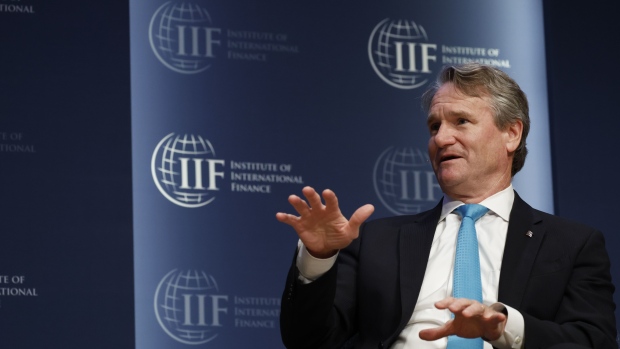 (Bloomberg) -- Even a bank CEO who’s been at it for almost three decades hasn’t seen an economic environment quite like this one.

Richard Fairbank, the founder and longtime chief executive officer of Capital One Financial Corp., said with inflation running at 40-year highs and unemployment near historic lows, the current economy is unlike anything he and other banking titans have ever seen.

“The last time inflation was raging like it is now, we weren’t in the jobs that we’re in,” Fairbank said Tuesday at an investor conference in New York hosted by Goldman Sachs Group Inc. “For all of us, we’re going to sort of learn this as we go along.”

Fairbank, 72, has been CEO since Capital One was spun out of its former parent company Signet Bank in 1994. Under him, the McLean, Virginia-based company has grown to become the fourth largest US credit-card issuer, with a market capitalization of $35.8 billion.

Fairbank said his company has begun to tighten underwriting for lower-income consumers, who have already started to go delinquent on card loans more quickly than their wealthy counterparts. Still, he said the company, which has been investing in travel products and offers the $395-a-year Venture X card, is looking to increase its share among big-spending, prime consumers.

“The good news is the credit metrics are still better than they were in the past but the bad news is the trajectory,” Fairbank said. “But along the way, we continue to trim around the edges.”

“If we see the right talent, we will pull the trigger and we will invest,” Ken Moelis, founder and chief executive officer of Moelis, said at the conference.

Incoming Perella Weinberg CEO Andrew Bednar, meanwhile, said his bank has a “mandate” from its investors and partners to expand, and that a decline in correlation between performance and compensation at the largest investment banks would create opportunities for his firm to do so.

ICE Focused on Mortgages Even With Rates Rising (2:03 p.m. NY)

“The best time to build a business is when some of these things are out of favor, when your clients are looking for solutions,” said Jeffrey Sprecher, CEO of ICE, which owns the New York Stock Exchange. “It’s going well.”

ICE and other exchange operators have been branching into data and other areas of financial technology in recent years as growth stalled in the traditional exchange business. Earlier this year, the company agreed to buy mortgage-software provider Black Knight Inc. in a deal valued at around $13.1 billion.

Sprecher said that his company is trying to build an infrastructure that can change the cost of wholesale mortgage using automation tools. “That can fundamentally change the capital markets,” he said.

On the fallout from the collapse of crypto exchange FTX, Sprecher expects the biggest impact will be on consumer behavior.

“A lot of people that thought they were wealthy will start to worry about their day jobs,” bringing them back to the office “to put in the hard work and earn an income,” he said. And while there will also be regulatory scrutiny of the crypto markets, Sprecher said he doesn’t expect “massive law changes,” adding that regulations “already exist — they will just be implemented.”

JPMorgan Chase & Co. expects trading revenue to rise about 10% this quarter from a year ago on continued strong performance in macro, said Marianne Lake, co-head of the firm’s consumer and community bank.

The guidance is based on quarter-to-date figures, Lake said Tuesday at the conference. In a wide-ranging conversation, Lake also reiterated JPMorgan’s fourth-quarter guidance for expenses and net interest income, but noted that each could be “a little better” than the firm earlier expected.

“Markets performance is good, particularly in fixed income,” Lake said. “In terms of NII and expense for the fourth quarter, I would say things have played out pretty much in line with the guidance.”

JPMorgan reported its highest-ever quarterly NII for the three months through September and raised its guidance for the year, a sign that the biggest US bank is reaping the benefits of the Federal Reserve’s rate hikes.

Lake, who earlier served as JPMorgan’s chief financial officer, said the US economy is “still strong,” but that the probability of a recession has gone up. Spending trends are moderating, but holiday spending is “so far, so good,” she said.

American Express Co. said the number of Platinum cardholders in its portfolio doubled in recent years even as it pushed the annual fee to $695 from $450.

AmEx has added a raft of benefits in recent years, including credits for Walmart Inc.’s subscription service and ride-sharing companies as well as flight and hotel perks.

“The reality is, it’ll go as high as the value allows us to go,” Squeri said of the Platinum card’s annual fee.

The changes have buoyed AmEx’s net card fee revenue, which has jumped 15% to $4.45 billion so far this year.

Discover Financial Services has seen spending on its cards slow in recent months as consumers deal with inflation running at a 40-year high.

Spending rose 9% in November compared with 11% in October, CEO Roger Hochschild said in a Bloomberg Television interview Tuesday. Both months were lower than the 14% increase the firm booked in September, he said.

Still, the company has continued to see strong growth in spending on everyday categories, he said.

“The consumer is hanging in there,” Hochschild said on the sidelines of the Goldman Sachs Group Inc. US financial-services conference in New York. “We are coming off unbelievably robust levels of consumer spending.”

The pullback is especially striking when compared to last year, when consumers returned to traveling and dining out after months of pandemic-induced lockdowns.

When it comes to the car industry, prices are expected to end the year down by about 17% or 18%, according Jeffrey Brown, the CEO of Ally Financial, one of the biggest US car lenders. Brown forecasts the decreases will continue into next year, likely dropping approximately an additional 15%.

“Frankly, I’ve been surprised that the market has taken all of the price we’ve put in,” Brown said at the conference. The market is, however, “probably close to hitting a saturation point,” he said, where customers say enough is enough.

Used car prices have dropped since the beginning of the year and dealers like Carvana are struggling as a result. Brown said he regularly communicates with the Carvana executives, calling them a “responsible” partner.

“Consumers are still spending more money right now, but the rate of growth is slowing,” Moynihan said at the Goldman Sachs conference.

The bank saw consumer spending rise 5% in November, a lower rate compared with previous periods, Moynihan said. Consumer deposit balances are starting to come down as well, but borrowing and credit quality “are still in good shape” despite the slowdown in activity, he said.

Those are signs that the Federal Reserve’s attempts to get inflation under control might be having an impact. Moynihan has said previously that consumers are in “good shape” amid rising rates and expenses, with cash to spend. As long as consumers “stay employed, the rate of spending out excess savings is very small,” Moynihan said Tuesday.

In other parts of Bank of America’s business, the company’s traders should fare well this year even as their investment-banking colleagues are hurt by a slowdown in deals, Moynihan said. Sales and trading is expected to be up 10% to 15%, while traditional investment-banking fees will be down 50% to 60%, in line with peers, he said.

The company is limiting new accounts it offers to customers considered at the “lower end of prime” credit scores, Chief Executive Officer Roger Hochschild said at the conference. The credit-card firm has already begun to see the prime consumers it’s long catered to eating out less and shopping more at discount stores.

Discover has seen spending growth on its cards slow in recent months as consumers battle the effects of inflation running at 40-year highs and a raft of job-cut announcements from the country’s largest technology firms. Still, the company was adamant that its focus on prime consumers will help it navigate any economic downturn better than rivals focused on less-credit-worthy customers.

“That’s why you’re seeing stress in the subprime and near-prime issuers, where those households are already tapped out,” Hochschild said. “They’re already shopping at Dollar General or the lower-end retailers.”

Gas stations and grocery stores could offer the first signs that US consumers are starting to struggle, according to executives at the country’s largest store-card provider.

Instead of filling up the tank, they’ll go more often and time their purchases around the days of the month they get paid, Wenzel said. Another red flag: Customers who turn off auto payments that took care of statement balances in full, in favor of just the minimums.

“It’s all about elongating liquidity for them,” Wenzel said, adding that, when his company listens in on collections calls, many customers have started lamenting rising rent costs. “What we hear today is, ‘I can’t make my rent payment, it’s up. Inflation is killing me on gas and groceries.’ You see that.”

Investors are closely watching credit-card companies for signs that US consumers are having trouble keeping up with their bills. So far, losses remain near historic lows, though delinquencies have begun to tick up in recent months.

Wells Fargo & Co. CEO Charlie Scharf said the bank is working to find the right balance of how much to raise the rates it’s paying depositors while protecting the firm’s profitability.

The lender sees increasing rates on deposits more as a tool to retain “franchise customers” than a way to attract new clients, he said at the conference. The bank is studying how customers at different levels of affluence and deposit concentrations react to rate changes as part of its evaluation, he said.

“There is a deep analysis that you need to do about how much can you get away with in terms of not passing on rate in the shorter term versus what do you lose in the longer term for just not treating customers properly,” Scharf said.

Citizens Financial Group Inc. CEO Bruce Van Saun said the bank was being “very disciplined” in its approach to commercial lending following a pull-back among banks.

“We’ll see some growth there because the economy is still doing OK, and there’s still folks borrowing money to expand or to do deals,” even as activity tapers off going into next year, Van Saun said during the Goldman conference.

“You have to be a little bit more cautious,” Solomon said in a Bloomberg Television interview Tuesday.

Last year “was an exceptional year for the firm,” Solomon said, adding that 2022 is a “different year and so naturally compensation will be lower.” But he added that he’s surprised by how resilient the competition for talent is.

While the bank’s economists expect the US to avoid recession next year, he said he’s a little more cautious on the outlook.

The firm is facing a tricky balancing act to keep a lid on total spending while rewarding its top performers in a very competitive market for top talent, Solomon said at the firm’s financial-services conference. Compensation costs are the biggest item in Goldman’s expense line.

Goldman has been cutting costs to protect profits from a costlier-than-expected foray into consumer banking as well as the global economic slowdown, which is taking a toll on dealmaking.