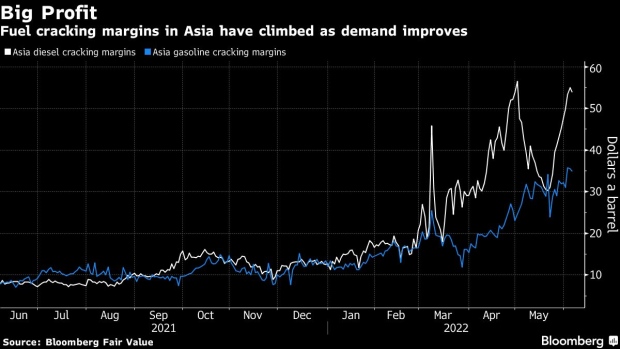 (Bloomberg) -- Some Asian oil buyers are planning to seek more crude from Saudi Arabia, even after the world’s biggest exporter raised prices by more than expected for the region.

At least two refiners intend to ask for more July-loading volumes, according to company officials who asked not to be identified. Across Asia, most long-term customers of Saudi Arabia are expected to take their full contracted supply as refining profits have surged, said traders. Barrels from other regions such as the US and West Africa are also more expensive, they added.

Saudi crude will be particularly popular among Asian refiners in nations such as Japan and South Korea that have shunned Russian oil following the invasion of Ukraine. India and China are still willing buyers, however, and some Chinese processors will even take Iranian and Venezuelan flows. Refiners will submit requests for July volumes from Saudi Arabia by Monday and be informed of their allocations by the end of the week.

Asian oil demand is forecast to strengthen as China cautiously emerges from prolonged virus restrictions that curbed its consumption. European buyers are also looking to the Middle East for additional barrels as they avoid Russian crude, intensifying competition just as the widening of a key spread makes oil from the US and North Sea more expensive for Asian consumers.

Offers for US West Texas Intermediate Midland crude for September arrival to Asia are about $4 a barrel higher than comparable quality Murban from Abu Dhabi, according to traders. China may also consider more oil from the Persian Gulf because barrels from West Africa are more pricey, they said.