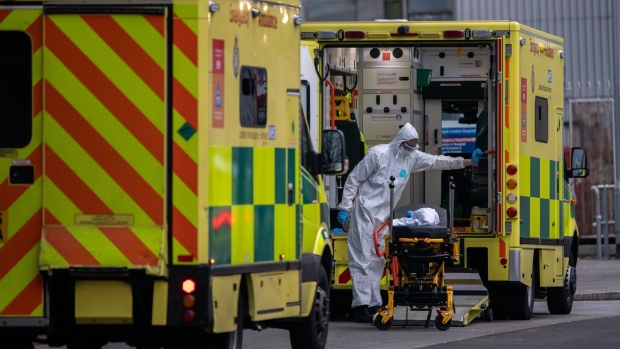 A worker in personal protective equipment cleans the inside of an ambulance after arriving at The Royal London Hospital in London, U.K., on Saturday, Jan. 9, 2021. London Mayor Sadiq Khan declared a “major incident” in the U.K. capital on Friday and warned the state-run National Health Service is at risk of being overwhelmed by a surge in coronavirus cases. Photographer: Chris J. Ratcliffe/Bloomberg , Bloomberg

(Bloomberg) -- Some people with Covid were able to transmit the virus to others after the 10-day mark, at least in the early days of the pandemic, a new U.K. study shows.

That’s according to research by the University of Exeter, which used an adapted test that can detect whether the virus remains active in those with previously confirmed infections. It found that 13% of 176 people studied had levels high enough to be potentially infectious even after 10 days.

This evidence comes as many countries, including England, are cutting isolation times for those who test positive to as little as five days to help relieve workplace staff shortages that have been fueled by the spread of the omicron variant.

“This current study reinforces concerns that reducing the self-isolation period to five days will increase the risk of highly infectious people spreading infection as they return to work or school,” said Lawrence Young, virologist and professor of molecular oncology at the University of Warwick.

The study used samples from 2020, when the original virus strain was still dominant, so it’s not clear how relevant the results are amid the spread of the delta and omicron variants, given different infectious and incubation periods.

How much of a risk someone poses to others depends on factors including the viral load being shed, the symptoms of the patient and levels of immunity in potential contacts, said Paul Hunter, professor in medicine at the University of East Anglia.