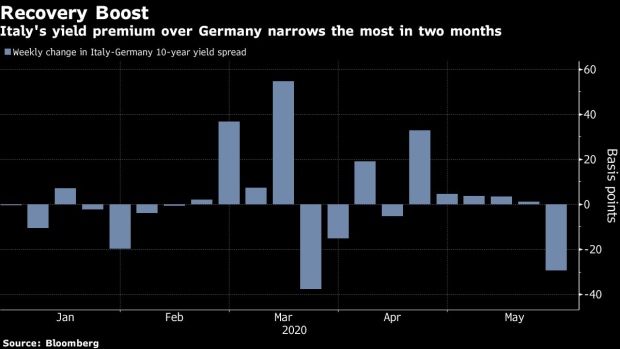 The European Central Bank (ECB) headquarters stand on the bank of the River Main in this aerial photograph at sunset in Frankfurt, Germany, on Tuesday, April 28, 2020. The ECB’s response to the coronavirus has calmed markets while setting it on a path that could test its commitment to the mission to keep prices stable. Photographer: Alex Kraus/Bloomberg , Bloomberg

(Bloomberg) -- After a strong week for Italian bonds investors may wish they could fast forward to early June, when analysts expect the next major wave of good news for the assets.

The bonds just delivered their best weekly returns in two months after Germany and France backed a 500 billion-euro ($545 billion) aid package. Yet spreads against German peers could widen, because the pace of debt sales is exceeding the current rate of ECB bond purchases, according to Citigroup Inc.

That leaves all eyes turning to the June 4 ECB meeting. Speculation is mounting that asset purchases will increase, after Chief Economist Philip Lane said the central bank must be ready to adjust its tools if necessary, according to the account of its April meeting released on Friday.

“This is a clear indication that the Pandemic Emergency Purchase Program could be topped up in June, if needed,” said Martin van Vliet, a rates strategist at Robeco in Rotterdam, who expects the ECB to raise bond-buying by 500 billion euros. “Anything short of that would likely disappoint market expectations.”

In the meantime, the week ahead includes ECB President Christine Lagarde taking part in a Twitter Q&A. There are also debt sales from Germany, Italy and the Netherlands, as well as euro area flash inflation numbers. The European Commission is also expected to present its proposal for a recovery fund on Wednesday.

“The symbolism of a step toward the euro having some fiscal authority is the overwhelming factor for now,” wrote strategists at Mizuho International Plc including Peter Chatwell. Such a move would transfer some of the burden of funding the recovery across all EU members.

Scheduled euro-area bond sales from Germany, Italy and the Netherlands are set to total around 24 billion euros for the week, according to Michael Leister, a rates strategist Commerzbank AG, who adds that “the door for syndications remains open.” France pays 25.5 billion euros of redemptions and coupons on Monday. The U.K. will hold four regular gilt auctions next week and buy back bonds at a steady rate of 1.5 billion pounds per operation.

BOE chief economist Andy Haldane speaks on Tuesday and policy maker Michael Saunders follows on Thursday, when investors will be keen to hear their views on the prospect of negative interest rates.