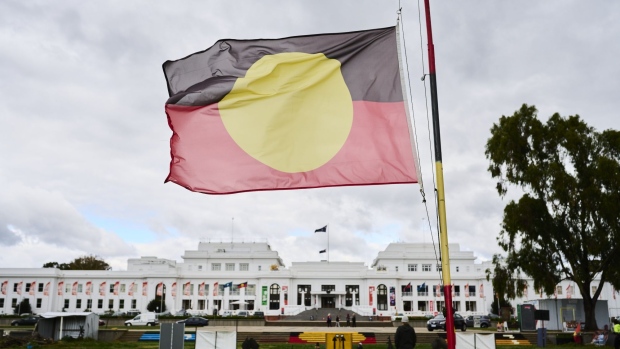 The Aboriginal Tent Embassy in the Parliamentary Triangle in Canberra, Australia, on Monday, May 10, 2021. Australia's Treasurer Josh Frydenberg says he will deliver a "jobs budget" on Tuesday that’s expected to boost spending on roads and railways to support hiring and extend income-tax breaks for low and middle income earners to keep them spending. Photographer: Rohan Thomson/Bloomberg , Bloomberg

(Bloomberg) -- Australia will give one-off cash payments to Indigenous “Stolen Generations” survivors who were forcibly removed from their families as children to assimilate them into White communities, a practice that lasted for decades before finally ending in the 1970s.

The A$75,000 ($55,000) payments “in recognition of the harm caused by forced removal” are part of a wider A$1 billion plan announced by Prime Minister Scott Morrison on Thursday to support Indigenous welfare. The policy, which he said was “led together with Indigenous leaders,” comes after his government overhauled the Closing the Gap strategy first adopted in 2008 to erase the wide margins between Indigenous and other Australians in key health, education and employment indicators.

“This is a practical plan that builds from the ground up by making good on the harm caused to Stolen Generations survivors to supporting this and future generations of young people with more education opportunities,” Morrison said in a statement. “This plan is about real reconciliation, how we get there, and making sure all governments are held to account -- state and federal.”

Mirroring the U.S., where the Black imprisonment rate is more than five times than that of Whites, Aboriginal and Torres Strait Islander people make up just 2% of the population but 29% of all prison inmates in Australia. Compared with other Australians, Indigenous people are less likely to attend or complete school, almost half as likely to own their own home, and on average die about eight years earlier, according to government data.

Besides the A$75,000 payment, eligible “Stolen Generations” applicants will also receive a one-off “healing assistance payment” of A$7,000 and an opportunity to tell their story to a senior government official along with “a face-to-face or written apology.”

Opposition leader Anthony Albanese said it was unclear whether the promised funding was on top of previous budget allocations.

“The prime minister promises a new approach but the question is -- is this new money, or is this another shiny new announcement from existing funds?” Albanese said in an emailed statement. “For eight long years, the government has shunted its responsibility for progress on Closing the Gap to states and territories, on future parliaments and future generations.”

The government will release an annual report from next year to outline progress made in the new plan.