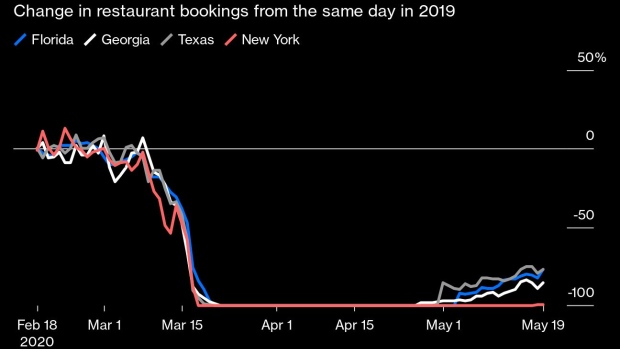 All is not lost. , Photographer: Scott Olson/Getty Images North America

(Bloomberg Opinion) -- There will still be a U.S. economy after Covid-19. People are going to need food, shelter, entertainment, health care, transportation and so on. But the shape of that economy -- what people buy and what they do without -- will change. Some businesses that make it through the acute stage of the crisis will shrink or vanish afterward, while some that shuttered will spring up again, reborn. It’s very difficult to anticipate these long-term shifts while the pandemic is still raging. But investment and hiring decisions have to be made, and an educated guess is better than nothing.

One industry that seems unlikely to recover is higher education. The pandemic is accelerating trends that were already in place -- reductions in state funding for colleges, a decline in high-paying foreign students and a broad decrease in demand. It’s also possible that the temporary adoption of online teaching during shutdowns will precipitate a longer-term move to distance education in lieu of expensive college classes on campus. Meanwhile, the disappearance of foreign graduate students will hamstring science, technology and math research at universities, weakening the nexus of university-private collaboration that sustains investment and job growth in college towns.

The restaurant industry, one of the most hard-hit, might fare better. In states such as Florida, Georgia and Texas that have begun to reopen, dining traffic is recovering very gradually compared with states that are still locked down, such as New York:

That indicates that consumer demand hasn’t vanished. But it might be depressed for a long time, especially if reopenings lead to new waves of infection. As long as a lot of people who patronized restaurants before the pandemic avoid eating out until treatment or a vaccine is available, restaurants and bars will be in trouble. These businesses never operated on fat profit margins anyway, and many can’t survive a 25% or 30% drop in traffic. Many will go out of business.

When the danger is gone, new eating and drinking establishments will appear to replace those that went bust. But many will be opening in downtown areas or shopping centers that are suddenly full of shuttered storefronts. Going out will be less appealing in neighborhoods that seem half-dead. That could make the pattern of eating in permanent.

A less vibrant restaurant industry is likely to hurt commercial real estate. The rent a commercial property generates depends not just on the productivity or attractiveness of the tenant business, but on the attractiveness of the surrounding area. Gloomy streets and strip malls will reduce the rental income even from the parcels that are still occupied.

Traditional retail will probably suffer even more than restaurants. For restaurants and bars, the alternative is dining in, which is often an inferior experience. But for physical stores, the alternative is online shopping, which can be more convenient and offer wider selections. The brick-and-mortar side of the industry was already under severe pressure before the crisis, and many analysts often spoke of a “retail apocalypse.” The pandemic will accelerate this trend.

Another business that might never recover is movie theaters. Box-office revenues were already under pressure as TV show production values and the quality of TVs improved. Now, coronavirus has caused theater revenue to go almost to zero. It seems likely that this will accelerate the consumer shift toward the small screen, and multiplex cinemas may well go the way of the drive-in.

Public transit is another industry that might struggle to make it all the way back. Many people will continue to work at home, thanks to rapid advances in teleworking technologies and changes in business models during the pandemic. Half-empty downtowns and shopping centers will also result in fewer riders, and fear of trains and buses likely will linger, at least for a while. Public transit systems, like brick-and-mortar establishments, rely on high usage rates to stay in the black. At least many transit systems can turn to local and state government for help.

Manufacturing is a more difficult case to predict. Weaker overseas markets, disruption of supply chains and reduced demand from a host of industries point to an enduring slowdown. But increased tensions with China might result in a push for reshoring production. And if people stay home more, that could result in increased demand for appliances, home furnishings and so on.

Air travel is another hard call. Passenger traffic is all but nonexistent, though it’s not clear that this is a permanent state of affairs. Advances in teleworking technologies and business models might depress the demand for business travel, but tourism seems likely to rebound after the pandemic.

So big changes are ahead for many U.S. industries. Practically everything that depends on foot traffic will take a hit. The shift toward conducting business and shopping online will intensify, and businesses that were already under pressure from digital competition will have trouble bouncing back. In these strange and perilous times, only the clever, innovative and lucky will flourish.