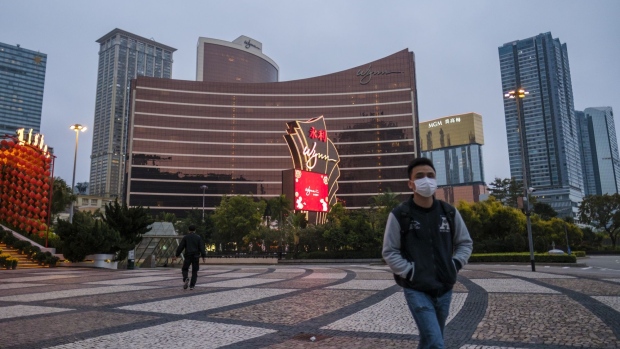 A pedestrian wearing a protective mask walks past Wynn Macau casino resort, operated by Wynn Resorts Ltd., in Macau, China, in the early morning of Wednesday, Feb. 5, 2020. Casinos in Macau, the Chinese territory that's the worlds biggest gambling hub, closed for 15 days as China tries to contain the spread of the deadly coronavirus. , Bloomberg News

(Bloomberg) -- Some casinos in Macau have decided to close VIP gambling rooms run by junkets, according to people familiar with the matter, a week after the head of the city’s top operator was arrested.

Wynn Macau Ltd. and Melco Resorts & Entertainment Ltd. notified junket operators on Monday that they intend to shut down the rooms where the companies bring high rollers to play from late December, said the people, asking not to be identified as they’re not authorized to speak publicly. Wynn, which runs two casinos in the Chinese gambling enclave, will close all junket rooms from Dec. 20, while Melco, which has three Macau casinos, will shut its rooms a day later, according to the people.

Spokespeople for Wynn and Melco didn’t immediately respond to requests for comment on Tuesday.

Junkets account for some 75% of Macau’s roughly $3 billion in annual VIP gaming revenue, providing a service that is part upscale travel agent and part money changer for big spenders in Macau. Casinos lend the operators chips so they can extend credit to VIP gamblers, which potentially leaves the casinos exposed to bad debt should junkets default.

The casino operators’ move to halt the $2.2 billion stream of gambling revenue that junkets bring in reflects a scramble to limit their exposure to the sector, which has been facilitating trips by big-betting punters from China’s mainland -- where casinos are banned -- to Macau for decades.

Alvin Chau, the chief executive officer of Macau’s biggest junket operator Suncity Group, was arrested late last month on allegations of establishing overseas gambling platforms and carrying out illegal virtual betting activities. Suncity has since closed all of its VIP gaming rooms in Macau’s casinos, and is said to have told some staff it will stop paying them amid concerns over cash flow.

Payback Period for Macau Casinos Balloons From a Year to Decades

Casinos are also required by Macau law to supervise and take responsibility for any junket activity happening in their casinos. Providing VIP gamblers with credit is one of the practices that got junkets in trouble with authorities as it can facilitate money laundering and capital outflow from China.

The risk of engaging with junkets now exceeds the returns for casinos, said Ben Lee, a Macau-based managing partner at consultancy firm IGamiX. “The junkets were the means to an end, helping the casinos crack the China market.”

Junkets have landed in the cross-hairs as part of an ongoing crackdown by China on the world’s largest gaming hub. Macau officials are currently reviewing its casino law in a move likely to spur more government oversight of casino companies. The enclave is also struggling amid the pandemic, with travel largely halted from China and Hong Kong, its two biggest sources of tourists.

Some casinos in the last few days began preparing to increase the number of betting tables on their general gambling floors and allocating more staff to special VIP sessions run by the casinos themselves, according to other people familiar with the moves. The new setups are aimed at providing gambling facilities for high rollers once the junket-operated rooms shut, those people said.

Credit Suisse analysts including Kenneth Fong said a scaling down of the VIP sector, which accounted for about one third of Macau’s gaming revenue in the first three quarters, will likely hamper market sentiment.

High rollers could instead turn to the mass market along with VIP businesses operated directly by casinos, he said, adding that direct business already accounts for about 20% of Wynn’s total VIP volume.