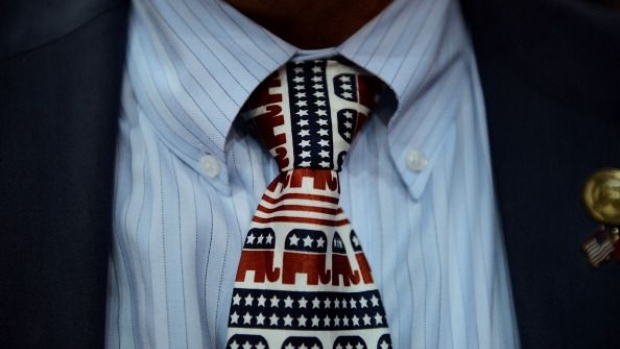 The GOP will live on. , Photographer: Daniel Acker/Bloomberg

(Bloomberg Opinion) -- “Never Trump” is a house divided. Some of the conservatives and former Republicans who oppose President Donald Trump have decided that it’s not enough for his tenure in office to end. All officials who “enabled” him must be ousted, “Trumpism” must be repudiated, and today’s Republican Party must be burned to the ground. Others say that while Trump himself has to go, and many in his party have covered themselves in dishonor to support him, Republican strength in Congress should nonetheless be maintained to keep Democrats from enacting a far-reaching progressive agenda.

To some extent, these writers and political operatives are engaged in an ideological dispute disguised as a tactical argument. Those anti-Trumpers who back Republican congressional candidates tend to oppose gun control, higher taxes and abortion. Those who cheer for a Democratic landslide tend to side with the Democrats on these issues or place a low priority on them. So naturally they are less worried about a Democratic sweep, and more eager to see a political catastrophe for Republicans that prompts them to undertake radical change.

But the tactical case for conducting a Sherman’s march through the GOP is weak. The problem is not just that very few voters cast their ballots for tactical reasons. It’s that it’s not at all clear that the Republican Party can be burned down or Trumpism extinguished.

Let’s say that the November elections lead to Republicans losing the White House, 20 House seats, 12 Senate seats and five governorships: a result considerably worse for the Republicans than most observers expect. That would leave them with roughly the same amount of power they had in 2009, after George W. Bush’s disastrous second term. Eight years later, they had a majority of everything. Or think back to the aftermath of Watergate. Four years after Gerald Ford left office, they had the White House again and their first Senate majority in decades. Parties can bounce back quickly, even after defeats that look epochal.

They’re not always chastened by near-death experiences, either. The Republican Party of 1981 was recognizably continuous with its Nixon-era self, only more conservative. And it was led by someone who had been a strong defender of Nixon. The Republican Party certainly changed somewhat between the Bush and Trump presidencies — not in a good way, from the perspective of never Trumpers.

Whether Republicans will move away from Trumpism depends on what that word means — and the term resists precise definition. The journalist Ronald Brownstein predicts a Trumpist party after Trump’s presidency, but he thinks any Republican who wants 500,000 legal immigrants a year instead of 1 million is a Trumpist. So is anyone who calls for a harder line with China. (Which would seem to make Joe Biden a Trumpist, too.)

Party coalitions have been very stable in recent years. A lot changed in American life between 2004 and 2016, but 44 states voted for the same party in each year’s presidential election. Evangelical Christians, unmarried women, atheists, African Americans, small business owners: The margins may have shifted from election to election, but majorities in each group have been consistent in their party preferences. The durability of voter alignments limits how much a party can change. Most of the people who voted for Trump in 2016 voted for Mitt Romney in 2012. And it’s not just voters: A lot of the people who have staffed the Trump administration would have worked for a Romney administration, too.

Most of the people who vote for a post-Trump Republican candidate in 2024 are going to be people who voted for Trump. Any competitive center-right party after Trump will by necessity represent substantially the same voters who put him into power in November 2016 and have sustained him in it since then. Any strategy for changing the Republican Party that fails to reckon with that fact is doomed.

This reality may point to another division among the never Trumpers. There are those who didn’t vote for Trump and favored his removal by Congress who are willing to concede that intelligent and well-meaning conservatives could disagree with them. And then there are those whose objections to Trump run so hot that they cannot countenance being part of a coalition with people who backed him (with exceptions for those who apologize for their past support).

That second group of never Trumpers is not going to be part of a new, reformed Republican Party that meets their standards. Its members should probably resign themselves to becoming Democrats, or politically homeless, for the foreseeable future. And they should consider whether what’s really behind their calls to burn down the Republican Party is a wish to escape the reality of America’s political disagreements.