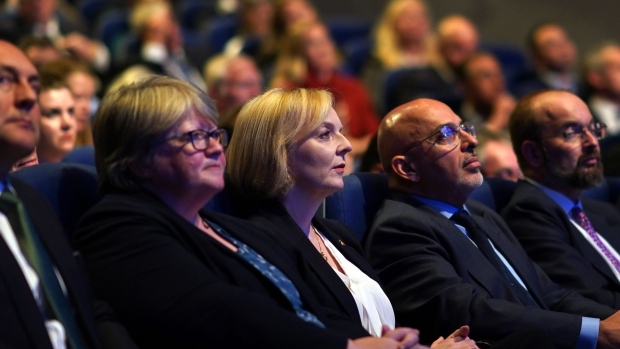 (Bloomberg) -- Liz Truss will struggle to drive through key parts of the economic revolution she’s planning for the UK because her standing in the ruling party is already so damaged, members of her Cabinet said.

Less than a month into her premiership, the ministers said Truss, 47, has failed to take basic steps to line up support for her plans such as putting them to Cabinet debate, and expressed doubts about the way she manages the ruling Conservative Party. They asked not to be identified criticizing the government.

Speaking on the sidelines of the Tories’ annual conference in Birmingham, the ministers predicted she will survive to the next election, due in about two years, because there isn’t enough time to give a new leader a real chance. The result, they said, is likely to be more rebellions from Tory MPs pushing around a lame duck premier, just like the one that forced her into a humiliating U-turn Monday morning on her plan to cut the highest rate of income tax.

The stark view suggests the “new economic deal for Britain” launched by Truss and Chancellor of the Exchequer Kwasi Kwarteng may be dead in the water before it has even got going. The policy calls for a major program of deregulation in areas such as housebuilding and childcare, alongside tax cuts.

Following the tax reversal, Kwarteng sought to reassure jangled Tory nerves with a pledge to deliver on the rest of the government’s economic strategy. Kwarteng is expected to bring forward his medium-term fiscal statement from Nov. 23 to reassure investors he has a plan to pay for the measures, two people familiar with the matter told Bloomberg on Monday.

“No more distractions,” Kwarteng said in his conference speech. “We have a plan and we need to get on with it.” The pound jumped as much as 1.5% after the tax U-turn was announced.

But one former Cabinet minister predicted Truss will be gone within a year to allow the party time to regenerate before the general election, which must be held by January 2025 at the latest. They said local votes in May 2023 would provide a clear indication of how badly Truss is doing, and predicted that her successor would have to come from outside the current Cabinet.

Still, not all Cabinet ministers hold such a dire view of Truss’s prospects. Two others said the government has enough time to present economic growth to voters to prove its project has been successful.

“The answer in politics, when you’re in a hurry, is to do those things which are easiest,” Conservative MP John Redwood, an ally of the prime minister, said at a fringe event in Birmingham. “There’s plenty of low-hanging fruit. I think we will design a very good supply side reform package that most Conservative MPs would vote for.”

“Kwarteng’s reputation is shot and a credible plan to balance the books will still be very difficult to craft.”

Truss’s problem is that her radical policy program needs party factions to compromise on core issues, and that requires a leader who can keep tensions in check. But Truss has no mandate from the British electorate, and some two thirds of Tory MPs voted against her in this summer’s leadership context, which she won thanks to members votes. She also appointed allies to key posts rather than seeking to unite the party after a divisive leadership campaign.

Easing planning rules to build more new homes, for example, is especially contentious for those Tory MPs who are defending small majorities in areas where there is local opposition to large-scale projects. Her plan to boost the supply of workers through more immigration runs counter to much of the Brexit politics of the past six years.

Ministers’ hints that welfare payments may not keep up with inflation as the government looks for cost savings have been met with horror by Tory MPs and another rebellion is likely, the Cabinet ministers said.

On Monday, Work and Pensions Secretary Chloe Smith told Bloomberg TV no decision had been taken, but there are already moves to force the government’s hand. Esther McVey, a former holder of Smith’s post, said it would be “a huge mistake not to give a cost of living increase in benefits.”

Michael Gove, the former minister who has become an unofficial recruiting sergeant for unhappy Tories, told Times Radio he also would “need a lot of persuading” to back benefits not being uprated in line with inflation.

Asked by reporters Tuesday if Truss can survive until the end of the year, Gove replied: “Yes.” But the very fact that Truss’s future appears to be so up for debate shows how much harder she is likely to find it to get divisive policies done.

One of the Cabinet ministers used gallows humor to sum up where Truss finds herself. They joked that they are an optimist, because they think the premier will last until there is a Tory rebellion on planning reforms.

Another Cabinet minister said Truss had made a serious error by not allowing her Cabinet to be involved over the decision to scrap the top rate of income tax in the first place. By involving the top panel of ministers in future, such mistakes would be less likely, the person said.

There is a febrile atmosphere at the party’s conference, with talk among delegates about whether the party can survive on its current course. A lot of Tories are making jokes out of their current travails. One senior Tory suggested going back to the days when William Hague was party leader in the late 1990s, when aides bought up newspapers within a mile radius of the conference so he wouldn’t see the negative headlines.