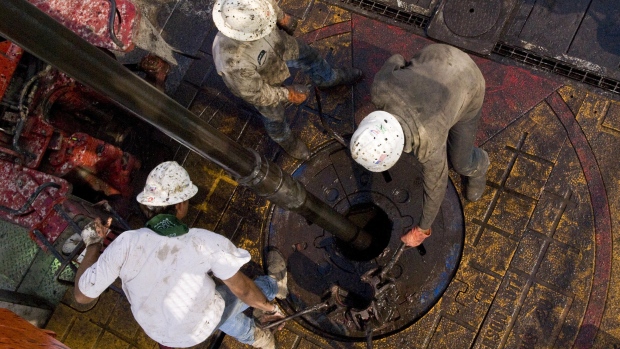 Patterson UTI Drilling Co. floorhands move a drill pipe collar as pipe is removed from a natural gas well being drilled in the Eagle Ford shale in Karnes County, Texas, U.S., on Tuesday, June 22, 2010. Reliance Industries Ltd. agreed to pay $1.3 billion to Pioneer Natural Resources Co. and its partner for its second purchase of shale gas assets in the U.S. in three months. The company will pay $263 million up front and fund $1.1 billion of Pioneer and Newpek LLC's drilling costs in a joint venture in the Eagle Ford formation in south Texas, Reliance said in a statement. , Bloomberg via Getty Images

(Bloomberg) -- Some oil and gas dealmakers are hitting the pause button as prices whipsaw following the ban on Russian oil imports. Companies are concerned about overpaying for assets while focused on cutting debt and rewarding shareholders.

For example, the owners of Sequitur Energy Resources are holding onto 83,000 net acres in part of the Permian Basin the company began marketing about six months ago, according to people familiar with the matter. The closely held company sought a higher valuation than what the market gave, said the people, who asked to not be identified because the matter isn’t public.

Sundance Energy, an explorer in the Eagle Ford shale that started a sale process late last year, also saw widening valuation gaps as oil prices surged following Russia’s invasion of Ukraine, the people said. While the company is talking with three bidders, its owners are keen to continue drilling and reap free cash flow for the time being, they said.

To be sure, some deals are still getting done in the oil patch, despite the volatility. Oasis Petroleum Inc. and Whiting Petroleum Corp. agreed to a $6 billion merger this week, while Chevron Corp. agreed last month to buy a biofuels producer for about $3.1 billion. But the Sundance and Sequitur situations underscore how seesawing commodity prices can muddle dealmaking, especially if the transaction requires new money to be invested.

In response to the surge in oil prices, domestic oil and gas companies are being called to ramp up production to help fill a supply shortfall and soften the blow to the economy. Still, it will likely take time to see a meaningful output growth as most producers are maintaining greater capital discipline than before, while supply-chain issues and labor shortage remain.

Oil futures in New York rebounded to nearly $115 a barrel Thursday, after slumping the most in almost two years as the fallout from Russia’s invasion of Ukraine continues to rattle the market. The sharp intraday swings came as the United Arab Emirates sent conflicting signals on whether OPEC+ would increase output to help fill a supply shortfall.