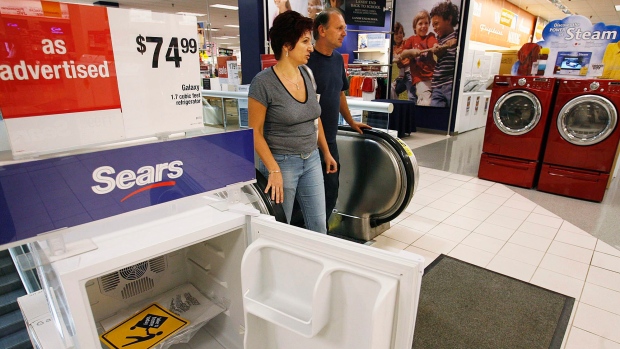 Customers enter the appliance department at a Sears store in Niles, Ill. , The Canadian Press

U.S. department store operator Sears Holdings Corp (SHLD.O) is having trouble stocking shelves, as some vendors have fled while others are demanding stricter payment terms because of difficulties hedging against default risk.

The strain in Sears' supply chain is exacerbated by the scarcity and high cost of a type of vendor insurance known as accounts receivable puts, which ensure a supplier will be paid even if the retailer files for bankruptcy, according to interviews with Sears' vendors and insurance brokers.

Two other small vendors told Reuters they stopped supplying Sears this year because they could not afford the insurance, whose cost spiked after Sears warned in March of "substantial doubt" over its ability to continue as a going concern. They asked not to be identified discussing confidential commercial arrangements.

Sears' vendors had previously benefited from support from Sears Chief Executive Eddie Lampert, who owns almost half of the company's shares and is its largest lender. Through his hedge fund, ESL Investments Inc, Lampert invested in vendor insurance contracts worth US$93.3 million in 2012, US$234 million in 2013 and US$80 million in 2014, according to filings with the U.S. Securities and Exchange Commission.

Sears’ regulatory filings show no investment by Lampert in vendor insurance contracts since 2015. A Sears spokesman said the 55-year-old billionaire is not currently investing in these contracts and declined to say why.

As Sears' financials deteriorated, other hedge funds such as Avenue Capital Group, and traditional credit insurance firms such as Euler Hermes Group SA, have also exited the insurance market, brokers and investors said. They did not specify the timing of their withdrawal.

The dearth of market participants has made the insurance contracts more expensive and harder to come by, putting pressure on Sears' ability to maintain a robust inventory of goods.

Merchandise inventory at Sears, once the largest U.S. retailer, fell to US$3.4 billion as of July 29 from US$4.7 billion a year ago, the company disclosed on Thursday. Sears has attributed the inventory decline to its transformation to an online-oriented business from bricks-and-mortar stores.

“We continue to work to manage our vendor relationships in a constructive manner… we will continue to ensure that our vendors deliver on their obligations to Sears,” Sears said in its second-quarter earnings statement on Thursday.

Sears and other mall-based retailers have struggled for years as shoppers migrated to Amazon.com Inc and other online stores. The storied American retailer, whose roots date back to 1886, has accumulated US$7.7 billion in losses since 2013, and seen annual revenue fall 44 per cent to US$22.1 billion as of the end of 2016.

On Thursday, Sears reported a second-quarter net loss of US$251 million, down from US$395 million a year ago, indicating that its plans to close more than 300 stores this year and slash costs further are helping stem some of the earnings challenges.

Brokers and investors said that Sears insurance contracts for vendors are currently quoted at more than 4 per cent of the value of the vendor's shipment per month, making them uneconomical for many suppliers whose profit margins are in the single digits. Three years ago, the contracts were being quoted at about 3 per cent per month.

LG Electronics Inc, which makes Kenmore-branded washing machines and refrigerators as well as LG-branded appliances, told Reuters it has not bought vendor insurance in the past year because of the cost.

Instead, LG said it negotiated shorter payment schedules to minimize the risk of not being paid by Sears. It declined to say how short the payment period was. The typical payment schedule in the industry is close to 90 days, though it can vary by item.

Sears has promised to pay some suppliers within 15 days, according to a source familiar with the matter who requested anonymity to discuss confidential commercial arrangements. Sears declined to comment.

A 15-day payment schedule gives a vendor priority for repayment in the event of a bankruptcy. This is because claims received within 20 days of a bankruptcy filing are typically repaid in full.

Some vendors are so keen for this protection, that they have offered Sears a small discount of around 5 percent on their merchandise, the source said.

William Danner, president of CreditRiskMonitor.com Inc, told Reuters that at the end of the second quarter, Sears would likely have used US$587 million to boost working capital – mostly from asset sales – due to the decision by some vendors to not extend as much credit. Sears' available liquidity at the end of July was US$810 million.

“Even for a huge company like Sears, finding this much more capital is a burden. This apparent loss of confidence in Sears by its vendors is greater now than it was at the end of 2016,” he said.

A spokesman for Sears declined to comment on the impact the lack of vendor insurance has had on its relationships with suppliers. A spokesman for Lampert did not respond to several requests for comment.

Lampert has complained on several occasions that vendors are trying to exploit Sears' woes to negotiate better terms. He said last month that some of its vendors reduced their support, "thereby placing additional pressure" on Sears.

The flight of some vendors has presented an opportunity for others. United National Consumer Suppliers, a wholesale distributor of overstocked goods such as beauty products and toys, now ships to Sears on the condition that it is paid within 30 days.

"We actually didn't do business with Sears until they found themselves in their recent challenges," said CEO Brett Rose. "As long as they pay their bills, we'll keep shipping to them."

Lampert has continued to support Sears in ways other than vendor insurance. He held about US$1.7 billion in debt mainly backed by the company's real estate and inventory as of April 29, according to regulatory filings.

Vendor insurance contracts, on the other hand, are not backed by any collateral. Last month, Lampert extended a US$200 million 151-day credit line to Sears at an annual interest rate of 9.75 percent.

While the market for specialized vendor insurance contracts is opaque, at least one investment firm, Blackstone Group LP's credit arm GSO Capital Partners LP, is backing Sears contracts through December, according to sources with knowledge of these contracts. They did not disclose their value. GSO declined to comment.