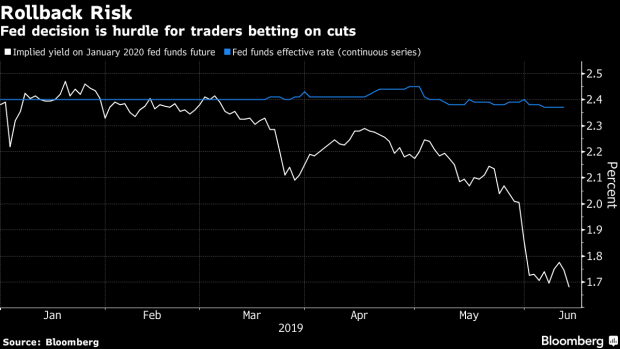 (Bloomberg) -- If one subset of Wall Street bond strategists is right, Federal Reserve officials this week may avoid giving a clear nod to the possibility of rate cuts ahead, a worrisome prospect for Treasuries bulls.

As the central bank’s June 18-19 meeting approaches, the bond market and many economists are banking on easing in 2019 as trade tensions cloud the global growth outlook and inflation expectations sink to record lows. Ten-year Treasury yields are still near the lowest since 2017, even after solid U.S. retail sales and factory data Friday. Meanwhile, futures traders have priced in about a quarter point of easing in July, and more by year-end.

But strategists at Charles Schwab, TD Securities and UBS are among those saying traders may be wrong to only factor in negative trade outcomes that would warrant an imminent reduction in borrowing costs. Many Fed watchers say the economic headwinds are enough for the central bank to retire its mantra of being patient on policy. Yet for the three firms above, committing to cuts would be premature before this month’s Group-of-20 summit, where a resolution of the tariff standoff remains a possibility.

“The Fed has to thread a pretty fine needle,” said Priya Misra, global head of rates strategy at TD Securities. “They won’t want to box themselves into a cut before the G-20 meeting, and given they do have more time to keep monitoring the data. The Treasury market has overdone pricing in the pessimism for this year.”

Benchmark 10-year yields enter the week at 2.08%, about 3 basis points above their 2019 reached June 7. In another sign of the market’s increased confidence in Fed easing, the gap between 2- and 10-year yields has widened to about 24 basis points, from below 10 in March.

TD advised going short the 10-year note earlier this month with a yield target on the trade of 2.2%.

While weak jobs data this month helped guide some economists to change their forecasts to indicate the Fed will cut rates as soon as July, several firms don’t see any rate reductions this year. Goldman Sachs Group Inc., RBC Capital Markets, TD and UBS are among those predicting a stable Fed policy rate for the rest of this year.

“The market has gotten pretty far out there with the prospect of building in several Fed rate cuts,” said Kathy Jones, chief fixed-income strategist at Charles Schwab, which manages about $3 trillion. “So there’s some vulnerability there. A lot will depend on the Fed’s messaging.”

Strategists at TD and UBS both forecast the 10-year yield will end 2019 at 2.6%. They also warn that the risk to their call is to the downside. Among the most bullish of forecasters is Steven Major at HSBC, who predicts 2.1% by year-end.

This week will also bring Fed officials’ latest quarterly projections, and possibly more information on the end of their balance-sheet runoff, set for the end of September. In March, policy makers scaled back projected rate increases this year to zero, from two, while still signaling a rate increase in 2020.

“The odds of a U.S.-China trade deal are basically 50/50, but the market is much more positioned on the negative side,” said Chirag Mirani, head of U.S. rates strategy at UBS. “I don’t think the Fed would preemptively signal a cut since they also don’t know the outcome of the trade negotiations.”