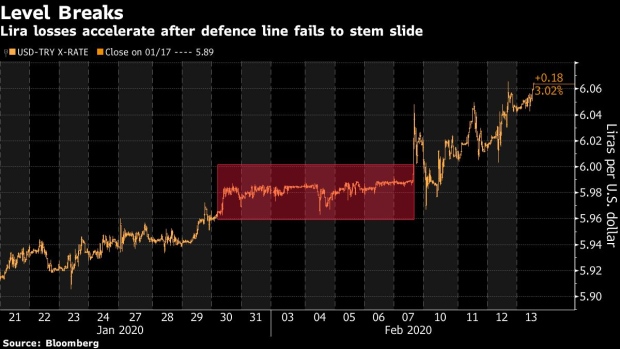 A customer uses an automated teller machine (ATM), operated by Turkiye Is Bankasi AS, also known as Isbank, on Istklal Street in Istanbul, Turkey on Wednesday, Oct. 9, 2019. The lira hovered near its lowest level since late August against the dollar while stocks and government bonds fell as the threat of U.S. penalties mounted after a Turkish military operation in northeast Syria got underway. Photographer: Kerem Uzel/Bloomberg , Bloomberg

(Bloomberg) -- Just as Turkish state banks rushed in to contain a rout in the lira last week, at least one fund was putting in a big wager that the slide was only getting started.

A single $500 million call-spread was executed minutes after the lira buckled past the 6-per-dollar-mark last Friday, according to data from the Depository Trust & Clearing Corporation. It stands to pay out if the lira depreciates to between 6.5 and 7.5 per dollar by Aug. 7 -- potentially pushing past a record low of 7.2362.

Another $250 million trade with the same strike prices, premiums and maturity was added a few hours later, the DTCC data show.

The wagers are just one expression of growing unease among investors about what appears to be a concerted effort by state lenders to stand in the way of the Turkish currency’s depreciation in the spot market.

On the day that the outsized bets were made, government-backed banks tried and failed to arrest the currency’s decline by flooding the market with dollars, unable to stop what became the lira’s biggest intraday drop in five months.

For all of last week, the lenders sold at least $4 billion dollars to support the currency, and another $500 million this week through Tuesday, according to traders with knowledge of the matter.

Investors say the sales helped spare the currency from a rout that’s spreading across emerging markets but the defense may not be sustainable. The interventions also risk distorting the market and fueling economic imbalances that will weigh on the lira down the line if they allow for more monetary easing than warranted.

“The longer that policy makers intervene to prop up the lira, the greater the risk of a disorderly adjustment,” said Jason Tuvey, a senior economist at Capital Economics in London, who sees the currency sliding some 20% this year. “There are already signs that Turkey’s strong recovery over the past year is fueling a fresh worsening in the current-account position.”

A cumulative 1,250 basis points of interest-rate cuts since July have pushed Turkey’s benchmark below inflation, prompting a creeping shift by households and companies into dollar savings accounts and giving way to capital flight by foreign investors.

Yet, encouraged by the currency’s recent stability and slower inflation, the central bank looks determined to press on with more cuts -- albeit at a slower pace -- and engage in the stimulus President Recep Tayyip Erdogan needs to bolster the economy. The central bank next meets to set policy on Feb. 19.

In a sign of broader bearishness toward the lira, one-month 25-delta risk reversals -- a measure of the premium investors pay in the options market to sell the currency rather than buy it -- more than doubled since the end of January.

Since the option trades were initiated on Feb. 7, the lira has weakened less than 1%. But it’s now broken through key support levels, tumbling out of the tight range that held it back until now and quickly opening the way to further losses.

The currency “seems to be on an invisible string attached to the 6.00 level,” said Piotr Matys, a strategist at Rabobank in London. “When it snaps, dollar-lira is likely to shoot toward the May 2019 high at 6.2457.”

To contact the reporter on this story: Constantine Courcoulas in Athens at ccourcoulas1@bloomberg.net