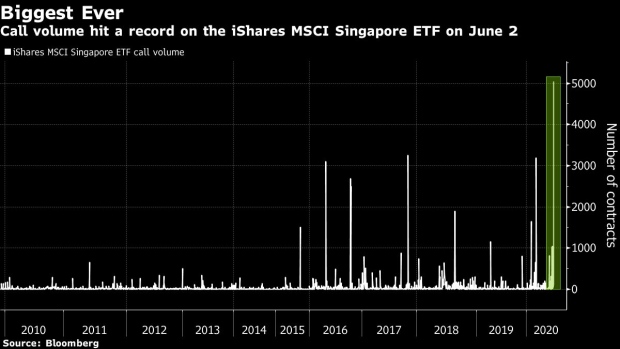 Singapore Exchange Ltd. (SGX) signage stands inside the bourse's headquarters in Singapore, on Thursday, Jan. 19, 2017. The SGX has tendered a 4.75% stake in the Bombay Stock Exchange for sale in an initial public offer, valuing its shares at S$42.8m to S$42.9m, the exchange said in a filing Jan. 19. Photographer: Ore Huiying/Bloomberg , Bloomberg

A total of 5,044 iShares MSCI Singapore ETF calls traded on Tuesday, compared with a 20-day average of 222, according to data compiled by Bloomberg. The November $21 calls were the most active, and Susquehanna Financial Group LLLP noted one trade where someone bought 3,800 of those options in odd lots, mostly paying 45 cents each. The U.S.-listed ETF itself rose 2.1% to close at $19.12.

“This is a big trade” in “rarely traded EWS,” Susquehanna derivatives strategist Chris Murphy wrote in a note, referring to the ticker symbol. Murphy, who is based in Pennsylvania, added that “analysts have targeted Singapore as a potential destination for banks that want to move out of Hong Kong.” Lenders comprise 36% of the ETF, and real estate investment trusts 17%.

The action in EWS is the latest sign of increased bullishness on Singapore. Local investors on a bargain hunt have been flocking to the biggest exchange-traded fund tracking the nation’s shares. The $723 million SPDR Straits Times Index ETF has gathered almost S$330 million ($236 million) since January, more than any previous year through May. As the Straits Times Index plunged to a decade low in March, investors poured S$212 million into the fund, the most in a month since 2002. The city-state’s benchmark equity gauge is up nearly 19% from a March 23 low, though still down 17% year-to-date.

Singapore has been discussed as a potential beneficiary of China’s increasing moves on Hong Kong, with asset managers looking at opening offices in the city-state, Hong Kong parents eyeing Singapore schools and more. While the coronavirus may have affected these trends, China’s decision to impose new security legislation on the former British colony increases uncertainty about Hong Kong’s future and may boost the attractiveness of other hubs in Asia.

On the iShares MSCI Singapore ETF, November $21 call volume itself was 4,569 on Tuesday, compared with open interest of 659, according to data compiled by Bloomberg. That indicates most of the contracts were new positions.