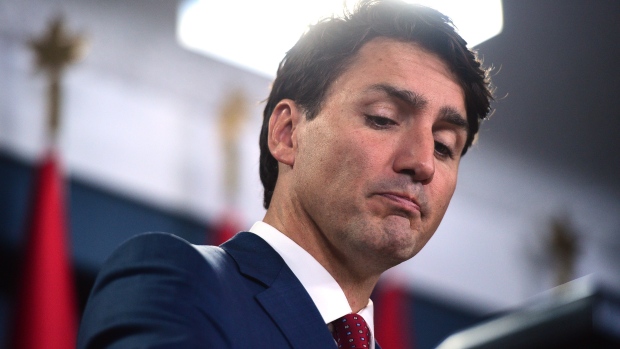 Fear of the North American Free Trade Agreement’s death may not be so greatly exaggerated.

U.S. President Donald Trump has repeatedly threatened to terminate the deal long seen as critical to Canadian, American and Mexican economic strength. Some experts believe America’s bargaining positions are anathema to Canada and Mexico, possibly with the clear intent of sabotaging the renegotiation process.

Asked to address the rising threat Wednesday afternoon immediately after meeting with Trump at the White House, Prime Minister Justin Trudeau declared multiple times Canada was “ready for anything.” However, there’s a school of thought that it will be difficult for Canada to be ready for the “huge shock to the economy” that would come the day after NAFTA dies.

“It would create, I think, something close to panic in Ottawa because if it wasn’t addressed, it could trigger a recession,” said Ian Lee, an international business professor at Carleton University’s Sprott School of Business, told BNN via telephone. “The Canadian dollar would go down significantly, shares of any exporting company to the U.S. would see their share prices drop significantly.”

“The short-term shock would be very, very significant,” Lee said.

While ultimately Congress would have to sign off on any White House decision to drop out of NAFTA, Bennett Jones international trade group co-chair Milos Barutciski told BNN via email the U.S. president “can take unilateral steps that will detrimentally affect the functioning of NAFTA to the point that it would severely disrupt supply chains across the three countries whether the deal is formally terminated or not.”

The question is more complicated than whether or not to terminate, Barutciski explained, but part of the problem in predicting the immediate consequences of killing NAFTA is the lack of precedent.

“This reminds me a bit of 9/11 and of the 1995 Quebec referendum, in that we have not had these things happen before and, therefore, while we know there will be volatility [from a NAFTA termination], we have no reasonable way to forecast it,” Peter Dungan, director of policy and economic analysis at the University of Toronto’s Rotman School of Business, told BNN via email.

Brexit provides the closest historical comparison, according to Philip Cross, a former chief economic analyst for Statistics Canada and now a senior fellow at the Macdonald-Laurier Institute.

The United Kingdom’s decision to leave the European Union, Cross explained to BNN via email, has hurt the ability for U.K. businesses to make long-term spending plans; and if the U.S. decides to leave NAFTA, the same problem could crop up for Canada.

“The more probable business reaction [to ending NAFTA is] they would continue to sit on their hands about business investment,” Cross said, adding recent Canadian business investment has already been lower than expected. “That slows growth in the longer run, which is sort of the reaction we saw during Brexit.”

Beyond the short and longer-term costs to the Canadian economy, Carleton’s Lee and Macdonald Laurier’s Cross believe the end of NAFTA could cost Trudeau his job.

Lee argues the two most important jobs of any Canadian prime minister is to “make sure Quebec doesn’t separate and that our trade relationship with the U.S. remains unblemished.”

“So if a prime minister, even if it wasn’t his fault, was to lose NAFTA, it would have profound consequences for the government of Canada and their ability to remain in power,” Lee said.

The United States economy would also suffer in the event Trump announces an intent to end NAFTA, but Barutciski of Bennett Jones and Lee both argue the impact on the Canadian economy would be far more negative.

“Think the United States gets a sniffle and we get the flu,” Barutciski said.

“Everyone understands that if a Ford F250 hits a Honda Civic in a head-on collision, the Ford is going to demolish the Honda and we are the Honda,” Lee said. “It would have immediate consequences… and depending on how long the uncertainty lasts, you could even see layoffs from companies that focus on exporting to the United States.”

“All of the consequences are negative,” Lee said. “There are no good consequences from the termination of NAFTA.”

What should Canada do in the NAFTA talks?