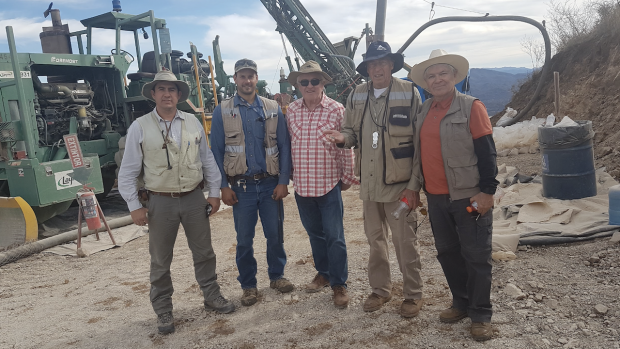 Monetary and fiscal stimulus in response to COVID-19 has created fertile ground for higher gold prices. The yellow metal has retreated a bit from the all-time highs that it hit in August, yet, it continues to trade at historically high levels.

It’s an environment that has given a real lift to gold companies across the spectrum, from major miners like Barrick Gold to the smaller explorers and developers who look for the gold deposits that feed those majors’ project pipelines.

“If our drilling program for deeper zones of high-grade gold at Cerro Caliche is successful, our shareholders will have a huge win. Regardless of whether this happens, or it doesn’t, we are on track to become a gold producer which is a game changer in itself”

After a dry period for financing, junior explorers/developers are finding themselves able to raise the cash needed to grow known gold resources and discover new ones.

One company taking full advantage of this is Sonoro Gold Corp (TSXV: SGO | OTCQB: SMOFF), which recently changed its name from Sonoro Metals to better reflect its focus on gold in this high-flying market.

Sonoro set the table several years ago when few were interested in gold properties by acquiring two projects, Cerro Caliche and San Marcial, which they knew contained numerous historic artisanal gold mines, in Sonora State, Mexico. Now that gold is back in vogue with investors, Sonoro is prepared.

The company has a clear plan to create value through exploration drilling around these former mines while it develops plans for an open-pit heap leach mining operation (HLMO) based on an already existing gold resource. Sonoro hopes to quickly grow production once the mine is commissioned, hence the project’s preliminary order of magnitude mine design, which is meant to allow production to be easily scaled up as the size of the resource increases.

Sonoro’s most advanced core asset is its Cerro Caliche project near the town of Curcupe. It has 5 mines in its vicinity and sits directly in between two: Premier Gold’s Mercedes Mine and Goldgroup’s Cerro Prieto Mine.

Cerro Caliche is in a mine-friendly territory. Sonora State has a 500-year mining history and, in 2018, its more than 30 precious metals mines generated 1.9 million oz of gold and 21 million oz of silver making it an important contributor to the state’s economy and employment.

The report covered a small portion of the known mineralization and established a significant 200,000 oz inferred gold resource which is expected to form the initial supply of mineralization for the proposed mine. An ongoing infill and step-out drilling program is expected to substantially increase this amount with a follow-up technical report planned for early 2021.

This mineralization is near the surface and the company anticipates that the gold can be extracted using low-cost, heap-leach methods. As a result, the focus of the ongoing preliminary design work and cost assessments is for so-called truck and shovel bulk mining, followed by crushing and then stacking the mined material on a leach pad.

A solution is sprayed on the stacked material which leaches out the gold. The fluid is then recovered and processed to remove the leached gold. It is a very clean and closed system, as the fluid is then treated and then re-applied in a continuous loop.

Going to production right away allows Sonoro to take advantage of higher gold prices by converting the current resource into cash flow just as the cash flow can finance future growth. Management plans to use the cash flow to fund drilling at Cerro Caliche with a goal of continuing to increase the near-surface resource.

They also expect to begin exploration drilling around its San Marcial project’s historic Soledad and San Marcial gold mines. Currently, Sonoro is conducting a mapping and geochemical program at San Marcial to delineate anomalous zones for a drill program, which is likely to start following the commissioning of the proposed Cerro Caliche mine.

Sonoro’s Chairman, John Darch, comments, “Most junior mining companies have to raise a substantial amount of money to go into production, but the resource at Cerro Caliche is such that we can implement this pilot operation ourselves.”

To Darch’s way of thinking, this prospect puts his company in the sweet spot for gold exploration and development. In Cerro Caliche, it has a project that offers both near-term cash flow and the exploration upside that this cash flow can then help fund.

High-grade gold, geologic similarities to a nearby mine and epithermal modelling combine to build a solid case for a significant gold discovery

As the team at Sonoro wedded the wealth of data left behind by previous explorers with its own exploration programs at Cerro Caliche, it saw signs that the potential for deep mineable high-grade gold zones had become a serious possibility.

Of particular interest was the project’s geological similarities to the nearby Mercedes mine.  Mercedes’ ore comes principally from veins containing high and bonanza grade gold, whose strike is in the direction of the Cerro Caliche property. They form part of a geologic trend, that though covered by gravels before the Cerro Caliche property, appears to extend onto Sonoro’s ground.

Adding to the case for high-grade veins to exist at Cerro Caliche is data that demonstrates that both the Mercedes mine and Cerro Caliche contain similar host rocks and may share the same epithermal gold source.

Moreover, Sonoro has begun a 6,000 m drilling program that will test 20 high-grade gold targets which are at depths between 150 to 350 m. The targets consist of conceptual high-grade gold veins similar to those found at the Mercedes mine.

Adding to the potential for a discovery is the well-established epithermal geologic model which shows these veins could exist and may have supplied the gold found in Cerro Caliche’s many zones of near-surface gold mineralization.

Success with this program would likely complement the company’s activities of pursuing its heap-leach operation and could also potentially develop a high-grade underground mine. The possibility is also that it may do both. Underground mines are often more expensive to build and much slower to develop. Given the HLMO’s expected low capital cost and fast build potential, it is not out of the question.

The deep drilling, however, is a high-risk activity as Sonoro’s Chairman John Darch advised investors in a recent shareholders letter, saying, “As good as our chances may appear, in the end, it is high-risk exploration, so while our excitement and optimism grow, we should temper our enthusiasm with the reality that we cannot predict with any certainty what the results will be.”

While Darch advises that investors keep their feet on the ground regarding the high grade drilling, he is convinced that Cerro Caliche’s shallow gold resource is about to expand substantially. In a report issued last June, the company detailed a resource target totalling 75-100 million tonnes of 0.3 to 0.5 g/t gold for the project’s 17 shallow gold zones. Should they prove correct, there will be considerable room to expand the planned mining operation.

Cashed-up with a plan for success

In a sign the investment world likes Sonoro’s plan of attack at Cerro Caliche, the company recently completed an oversubscribed $8 million financing, an amount which should go a long way towards funding the company’s current exploration and development drilling together with its HLMO  development program which includes advanced mine design and additional metallurgical testing.

Part of the raise is to fund a 10,000 m program of shallow drilling which is intended to substantially expand the current oxide gold resource. It forms the start of a planned 50,000 m campaign that is expected to continue through 2021.  Additionally, it will fund the core drilling of the high-grade gold targets.

Lots of drilling is generally good for a junior gold explorer, as it usually generates a steady news flow that can attract investors’ attention. Sonoro currently has a diamond drill testing its high-grade targets and a reverse circulation rig beginning a major campaign of infill and step-out drilling across the project’s 12 square kilometers of mapped and partially drilled shallow gold mineralization.

A third smaller air-track drill is to join the campaign in a few weeks. This all but guarantees an ample news flow. In total, around 20 core holes for exploration and metallurgical testing and up to 50 reverse circulation holes are expected to have been drilled by December.

Following the receipt of the assays from the shallow drilling, Sonoro plans to issue a revised resource estimate which should amount to yet another important addition to its news flow.

A story attuned to gold’s strength

Anticipating a future where the company could get a veritable tidal wave of investor attention as it reached various development and exploration milestones, “It was now or never in regard to changing its name to Sonoro Gold,” according to Darch.

Now that the name change is out of the way, the stage is set for Sonoro to build a major shareholder following. It has a year full of potential news-making share-price catalysts, from the announcement of technical reports regarding the HLMO’s economics and potentially a substantial increase in the shallow oxide resource, to the construction and commissioning of the HLMO.

On top of this there is, at least until early 2021, the possibility that a game-changing high-grade gold discovery will be made.

Some analysts consider the developing HLMO and its surrounding shallow gold zones to be the real company maker, while the high-grade exploration should have little effect if it does not pan out. In essence, the high-grade potential holds the promise of a huge share price upside with the downside appearing more than covered by the company's steady transition to a high-growth junior gold producer.

“Our executive consists of a diverse team which has many decades of complementary expertise. We have collectively discovered, developed or operated more than a dozen copper or gold deposits or mines,” Darch explains.

“Having this in-house expertise allows us to have a shorter time horizon than most juniors while increasing the probability that Cerro Caliche will be another success story to add to our team’s track records.”

Given that gold is currently trading at around USD$1,900 an ounce, what Darch says should add further to Sonoro’s appeal to potential investors.

Learn more about the company by visiting their website here.