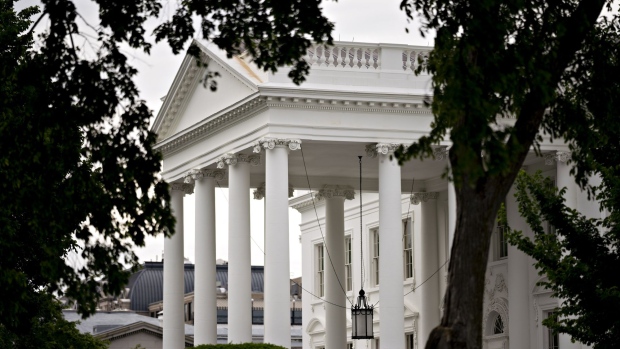 The White House stands in Washington, D.C., U.S., on Wednesday, May 20, 2020. President Donald Trump today said he may reschedule a meeting of the Group of Seven (G-7) nations to take place at Camp David, after having canceled the in-person gathering due to the coronavirus pandemic. Photographer: Andrew Harrer/Bloomberg , Bloomberg

The panel convened for about an hour virtually and spoke in favor of bipartisan legislation from Sens. Amy Klobuchar, a Minnesota Democrat, and Iowa Republican Chuck Grassley, according to two people familiar with the matter. That legislation would prohibit dominant platforms from giving an advantage to their own products. The White House stopped short of endorsing the bill during the meeting, according to a person familiar with the matter.

Amazon and Google were the primary focus of the discussion since they control search engines that can favor their own products, the people said. Among other things, the business leaders critiqued the Amazon practice of punishing brands that sell products on competitors’ sites for lower prices, by burying them in search results, one of the people said. The major technology companies have warned that the bill would harm products consumers love, as well as put them at a disadvantage versus international competitors.

“The administration will continue to take all responsible actions within its power to promote competition,” the White House said in a statement following the meeting. The White House representatives told the companies that “they look forward to working with Congress to make bipartisan progress on the issue, and to engage with companies across the technology sector to promote a more dynamic, innovative, and competitive economy.”

Representatives for Yelp, Amazon, and Alphabet didn’t immediately respond to requests for comment. Sonos confirmed its Chief Executive Officer’s attendance and referred to a letter it sent backing the bill.

Molson Hart, whose company Viahart Toy Co. sells its products on Amazon and who was part of the panel, said the speakers also discussed the importance of holding Chinese merchants to the same tax obligations as online merchants based in the U.S.

“The White House wants to foster a competitive and innovative tech landscape, one that is beneficial to not only businesses small and large, but also American consumers,” Hart said.