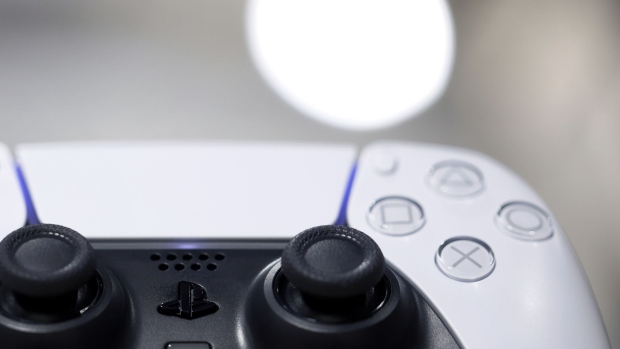 A controller for a Sony Group Corp. PlayStation 5 (PS5) video game console displayed at the company's showroom inside the Ginza Place building in Tokyo, Japan, on Wednesday, Oct. 27, 2021. Sony is scheduled to release its earnings figures on Oct. 28. Photographer: Kiyoshi Ota/Bloomberg , Bloomberg

The company is “not at all finished expanding PlayStation Studios inorganically” and will look to keep making deals, said Jim Ryan, president of Sony Interactive Entertainment. Sony has been bolstering its portfolio by agreeing to take over Bungie Inc. and several other game developers in recent months. The company also wants to integrate Bungie’s expertise as a live services operator into its broader ecosystem as it aims to build out that aspect of its consumer offering.

Sony is already spending nearly half its PlayStation 5 investment budget on developing and growing live services and plans to increase that ratio to 55% by fiscal year 2025. It’s a part of the gaming business where Sony has had little meaningful presence previously, Ryan said, alongside PC and mobile, the two other areas of focus for expansion. The company projects PC net sales of $300 million in the current fiscal year, up almost four-fold from $80 million in the year just ended.

By 2025, Sony intends to have nearly half of its new first-party game releases on PC or mobile platforms, moving decisively “to a future where large elements of our community extend beyond the console,” the company’s presentation said.

On the hardware front, Sony said it expects the PlayStation 5 to overcome supply constraints next year and overtake the sales pace of the PlayStation 4 again. The PS5 was the fastest Sony console to reach 10 million units sold, however component and logistics issues have hampered the company’s ability to put consoles in gamers’ hands. Sony is mitigating additional market instability born out of the war in Ukraine by sourcing multiple suppliers, it said.