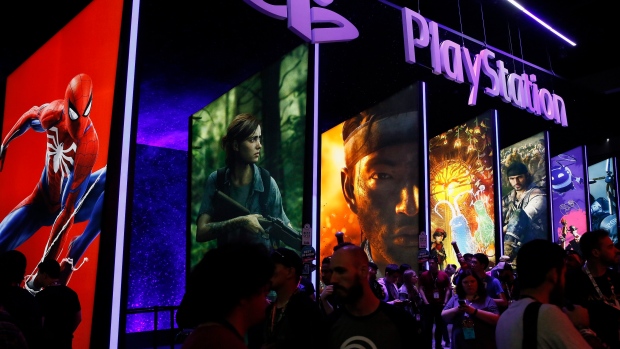 In this June 14, 2018, file people stand online next to the PlayStation booth at the 24th Electronic Entertainment Expo E3 at the Los Angeles Convention Center. Sony is shutting down its pioneering online-cable alternative, PlayStation Vue, citing the high costs of content and the difficulty of network deals. , AP Photo/Damian Dovarganes, File

Sony Corp. unveiled a set of games for the PlayStation 5 from the virtual stage Thursday, showcasing for the first time what its next-generation software will look like ahead of a holiday season showdown against Microsoft Corp.’s Xbox.

A new Spider-Man game will be ready for the holidays. Sony will also have a new Gran Turismo racing game, as well as an enhanced version of Take-Two Interactive Software Inc.’s Grand Theft Auto V for the PlayStation 5.

Sony showed an array of new games from other high-profile franchises, including Resident Evil 8, a remake of the action game Demon’s Souls and a sequel to the popular PlayStation 4 game Horizon Zero Dawn.

Expectations are high for the release of the PlayStation 5. Sony’s current system has dominated the video game market for the last seven years, selling more than 110 million units and overshadowing Microsoft’s efforts with the Xbox. Both companies began talking publicly about their next generation of consoles last year. Sony disclosed the first details of the PlayStation 5 in interviews with Wired magazine, promising technical improvements that would enable sharper graphics, larger game worlds and reduced load times.

...and here it is. Thanks for watching! #PS5 pic.twitter.com/pOzHc31X3G

The coronavirus pandemic has complicated what is normally a carefully choreographed process for introducing a new game system. Sony had planned to deliver a lecture on the PlayStation 5’s technical capabilities during the Game Developers Conference in March. When that event was called off, the Japanese hardware maker instead streamed an hour-long video presentation hosted by the PlayStation’s lead architect, Mark Cerny.

The Electronic Entertainment Expo is typically the premier launch event for the biggest game releases. The conference, known as E3, had been set to take place this week in Los Angeles but was canceled due to the virtus. Sony had not planned to participate at E3 but arranged a live streaming event on June 4. That was postponed a week in the wake of the protests over racial injustice that erupted around the world.

Sony will face off against Microsoft this holiday season when they each plan to release new consoles. Sony has been struggling to keep costs down for the PlayStation 5, but it hasn’t yet said what the new product will sell for. Partly due to a high initial price tag, Sony is limiting production of the console for the launch, people familiar with the matter have said.