The Sony Corp. logo is displayed at the company's headquarters in Tokyo, Japan, on Tuesday, April 9, 2019. Sony shares climbed in Tokyo trading after a report that Daniel Loeb’s hedge fund Third Point is building a stake in the Japanese electronics giant as part of an effort to sway its corporate strategy. Photographer: Kiyoshi Ota/Bloomberg , Bloomberg

Sony Corp. is weighing a bid for Leyou Technologies Holdings Ltd., people familiar with the matter said, paving the way for an intensified bidding war for the Hong Kong-listed gaming firm.

The Japanese tech giant is working with a financial adviser on the potential offer for Leyou, said the people, asking not to be identified because the matter is private. In May, the Chinese gaming firm confirmed it had received a non-binding takeover offer from Shenzhen-listed rival Zhejiang Century Huatong Group Co., after months of buyout talks with other bidders including iDreamSky Technology Holdings Ltd.

Shares of Leyou extended their gains to as much as 9.8 per cent after the Bloomberg News report. The stock has risen about 20 per cent this year, giving the company a market value of about US$1.1 billion.

Leyou’s controlling shareholder Charles Yuk had been in talks with iDreamSky for a majority stake sale since late last year. iDreamSky, which counts Tencent Holdings Ltd. among its investors, had been in discussions with CVC Capital Partners for a joint offer valuing Leyou at about $1.23 billion but the Covid-19 pandemic brought their talks to a stalemate, Bloomberg News reported in April.

Sony is hoping that it can edge out other bidders with greater certainty of financing, the people said. Leyou’s Yuk aims to choose a buyer and sign an agreement as soon as this month, the people said.

Talks are still ongoing and no final decision has been made, the people said. Other bidders could still emerge, they said. Representatives for Leyou and Sony declined to comment. 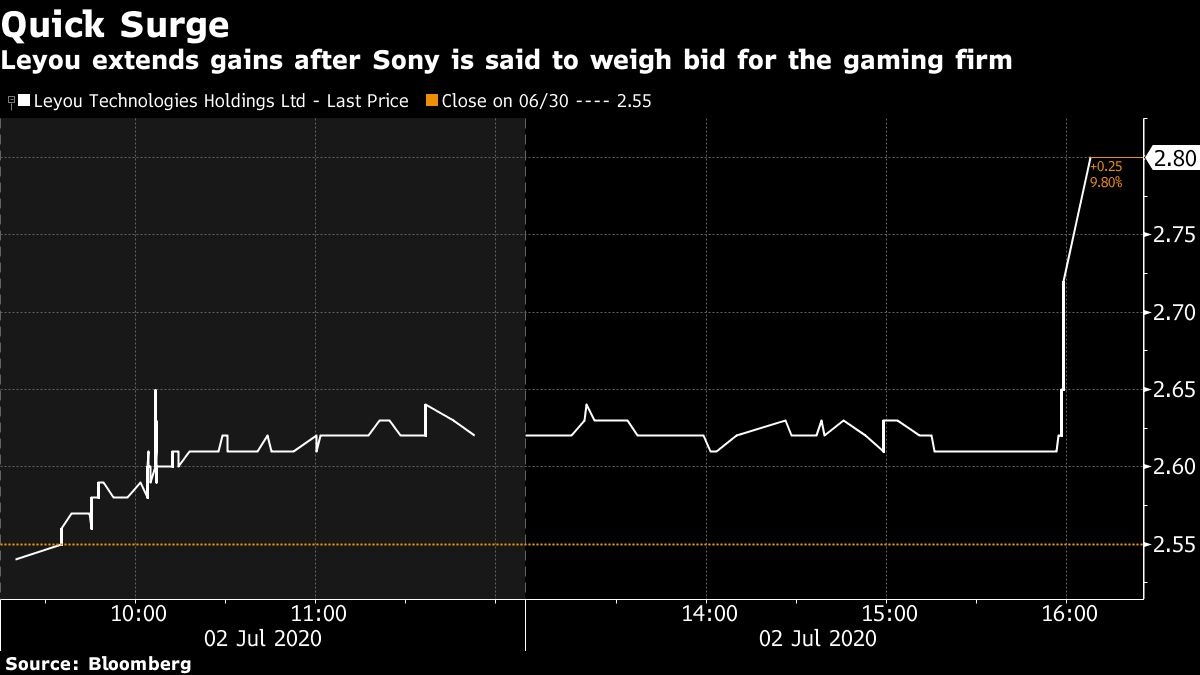 Leyou was listed in Hong Kong in 2011 and counts among its titles the free shooting games Warframe and Dirty Bomb. It’s also working with Amazon.com Inc. to co-produce a video game based on the popular fantasy series “The Lord of the Rings,” according to its website.

Sony has recently been aiming to beef up its content arsenal as the tech giant’s chief executive officer Kenichiro Yoshida believes that would in turn strengthen the value of its branded consumer electronics hardware. That includes PlayStation 5, the new video game console that the company plans to launch at the end of this year.

Leyou’s Warframe is already available on PlayStation 4 and the company has said in its latest earnings report that it plans to expand the game to more platforms including the next-generation consoles.