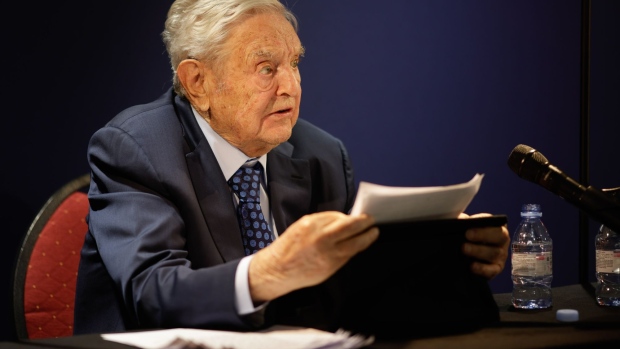 George Soros speaks on day two of the World Economic Forum in Davos, on May 24. Photographer: Jason Alden/Bloomberg , Bloomberg

(Bloomberg) -- When it comes to important European energy issues, such as whether to ban imports of Russian gas, billionaire George Soros said the leader he turns to is Italy’s Prime Minister Mario Draghi.

Speaking at a dinner on Tuesday on the sidelines of the World Economic Forum in Davos, Soros said he wrote to Draghi setting out his view that Europe is in a stronger position than it thinks when it comes to dealing with Russian President Vladimir Putin.

That’s as the bloc seeks to move away from a reliance on Russian gas in the aftermath of Putin’s invasion of Ukraine, even as it first needs to agree on the parameters of an embargo on its oil.

In notes dated May 23 and sent to Draghi, Soros said for Putin and gas, “Europe is his only market.”

“If he doesn’t supply Europe, he must shut down the wells in Siberia from where the gas comes,” Soros wrote in a copy provided after his dinner remarks. “It takes time to shut them down and once they are shut down, they are difficult to reopen because of the age of equipment.”

Soros urged Europe to make preparations to use its bargaining power and then impose a “hefty tax on gas imports.”

“Russia would never regain the sales it has lost,” he wrote. There was no immediate comment from Draghi’s office.

In his remarks to the dinner, Soros said he turned to Draghi as he is a leader with “initiative” and “imagination.”

That’s after he said that German Chancellor Olaf Scholz did the right thing, but only in the end. And that the “mercantilist policies” of Scholz’s predecessor, Angela Merkel, had fed Europe’s dependence on Russian fossil fuels.

“She had made special deals with Russia for the supply of gas and made China Germany’s largest export market,” Soros said. “That made Germany the best performing economy in Europe but now there is a heavy price to pay.”

Turning back to Draghi, Soros described him as “the man most capable.” He said he was yet to receive a response from the Italian leader to his written comments.