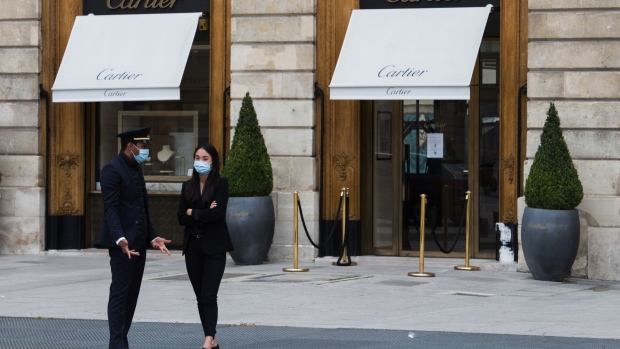 Bernard Arnault, the founder and chief executive officer of LVMH Moet Hennessy Louis Vuitton SE, is usually regarded as the most powerful man in luxury.

But right now he’s not the kingmaker. Instead, that title goes to Johann Rupert, chairman of Swiss group Cie Financiere Richemont SA, which owns brands like Cartier and Jaeger-LeCoultre. He holds the cards to consolidating the world of high-end fashion, watches and jewelry — and the industry is watching to see what hand he’ll play.

Of particular interest is whether Rupert will strike a deal with one of Richemont’s larger rivals, be it LVMH or Kering SA. Speculation about this has swirled for some time, but it’s been renewed by a report in the Miss Tweed blog that the billionaire turned down an informal approach from Kering CEO Francois-Henri Pinault in January. Rupert, who transformed his father’s South African tobacco business into the luxury goods group, also insisted in November that the company was not for sale.

But it’s not clear how long he can keep resisting such overtures. Scale is becoming ever more crucial in luxury, and Richemont’s shares have lagged its competitors over the past five years. Succession also remains an issue, since Rupert’s children are not as entrenched in the business as are the heirs to LVMH and Prada SpA.

Should the chairman eventually decide to accept a proposal, the question will come down to who makes the better suitor. And although LVMH may be the most obvious partner, I’d argue there’s a stronger case for choosing Kering.

Selling to LVMH would cement the Arnaults’ position as the undisputed leader in luxury. LVMH and Richemont combined could have about 70 billion euros (US$82 billion) of annual sales, based on the Bloomberg consensus for this year, which would be more than four times that of Kering.

The addition of Cartier and Van Cleef & Arpels, Richemont’s biggest jewelry brands, would create a so-called “hard luxury” powerhouse, since LVMH also owns Tiffany and Bulgari. The jewelers would sit alongside some of the best heritage fashion names, such as Louis Vuitton and Christian Dior. And the company would have leading positions in categories including beauty and wines and spirits. LVMH could even — at a stretch — afford to make a cash offer for Richemont.

Despite these attractions, Kering would make the better partner. For one thing, it may be the easier party to work with.

The trickiest part of any deal tends to revolve around people and power dynamics. And for how global these brands are, the luxury industry is still dominated by just a few influential families. Rupert holds 10 per cent of Richemont’s equity and 51 per cent of the voting rights. France’s Pinault family controls Kering, and LVMH is run by the Arnaults. Balancing power between family-controlled entities is never straightforward, but an accord with Kering would be more manageable.

The two groups already cooperate in eyewear, and Richemont and the Pinaults have a shared interest in the future of online retailer Farfetch Ltd. Artemis, the Pinaults’ investment vehicle, is a shareholder in Farfetch, while Richemont struck a complex three-way deal with Alibaba Inc. and Farfetch last November.

A Richemont-Kering combination would have strategic merits too. Although Kering has a strong stable of fashion brands, led by Gucci and Yves Saint Laurent, it punches below its weight in terms of jewelry and watches. So Cartier and Van Cleef & Arpels would get a substantial platform without having to fight other bauble makers for resources. Richemont also has a portfolio of fashion brands, such as Chloe and Azzedine Alaia, which have yet to live up to their potential — and Kering has a strong track record in revitalizing just these sorts of businesses.

Although this duo would be smaller than LVMH, with combined sales of about 30 billion euros based on this year’s estimates, it would still have the scale to challenge its rival. And while Kering couldn’t afford to buy Richemont outright, it could potentially use a mix of cash and its own stock to fund a purchase. Kering’s bigger market capitalization would make Richemont the junior partner, which may be less palatable to Rupert, but at least he could claim some of the upside from bringing the two conglomerates together.

Of course, Rupert could also choose to combine with smaller houses, such as Chanel or Hermes International. Or he could continue resisting a sale or merger of any kind. “He is the one who will change the balance of influence,” luxury adviser Mario Ortelli told me.

The danger is that as rivals bulk up, Richemont gets left behind. So far, the company has always taken a long-term view. Now that Rupert holds the cards in what could be the final luxury consolidation game, he should play them wisely.