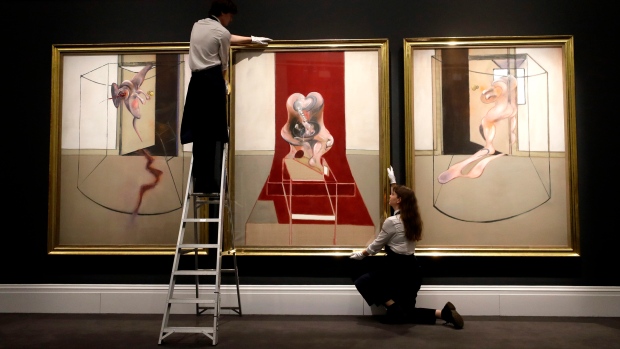 The art market will get its first big test since the pandemic began when Sotheby’s holds its evening sales of Impressionist, modern and contemporary art next month, headlined by a Francis Bacon triptych estimated at US$60 million.

The New York auctions, which will be streamed live on June 29, represent a break from a centuries-old tradition, the company said Friday. The auctioneer will be in an empty room in London, facing a bank of screens showing colleagues from around the world as they bid on behalf of clients remotely.

“What we wanted to do is to marry the very best of the live auctions with the very latest technology and modifications for safety,” said Oliver Barker, the night’s auctioneer. “This will be the very first time that I take it to the rostrum in London in order to conduct a New York sale.”

Sotheby’s will preview the exhibition starting June 8, with appointments by reservation and use of a booking tool to help control the number of visitors. Expect temperature checks, masks and social distancing.

“A critical component for staging the New York sales was the ability to get clients and their advisers in front of the works,” said Amy Cappellazzo, chairman of Sotheby’s fine art division. While some collectors buy sight unseen, as prices get higher most “like to see these works of art in person.”

Bacon’s “Triptych Inspired by the Oresteia of Aeschylus,” a three-panel oil painting created in 1981, will be the evening’s focal point. The Impressionist sale will include Picasso’s 1934 portrait of Marie-Therese Walter, estimated at US$9 million to US$12 million, and a group of Surrealist works. Those include a large painting by Wifredo Lam, estimated at US$8 million to US$12 million, which would be an auction record for the late Cuban artist.

Those who prefer to view the works from home will be able to do so by tapping virtual exhibition tools, including short videos filmed in front of the works by specialists.

“I am more enthusiastic about Sotheby’s than ever before,” said Patrick Drahi, Sotheby’s owner, who appeared in a webinar Friday with the company’s top executives. Drahi, a former client, bought the auction house last year for US$2.7 billion.