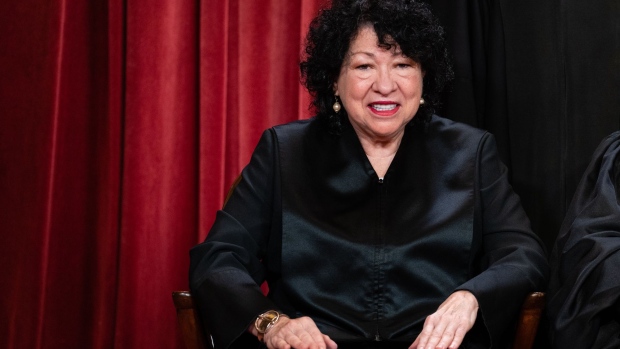 Associate Justice Sonia Sotomayor during the formal group photograph at the Supreme Court in Washington, DC, US, on Friday, Oct. 7, 2022. The court opened its new term Monday with a calendar already full of high-profile clashes, including two cases that could end the use of race in college admissions. , Bloomberg

(Bloomberg) -- US Supreme Court Justice Sonia Sotomayor pressed a lawyer for a wedding website designer Monday about where to draw the line if she has a First Amendment right not to serve same-sex couples.

The court is considering a case challenging whether a Colorado anti-discrimination law compels or silences free speech by businesses in a way that violates the Constitution. The case was brought by the Alliance Defending Freedom, a conservative Christian legal group, on behalf of Lorie Smith, the owner of 303 Creative LLC.

ADF CEO Kristen Waggoner, who is arguing the case on behalf of Smith, responded to Sotomayor that the Constitution protects the rights of speakers to refuse to promote messages they disapprove of.

She nodded to the court’s 2015 ruling recognizing a right to same-sex marriage, Obergefell v. Hodges. There the court said, “Many who deem same-sex marriage to be wrong reach that conclusion based on decent and honorable religious or philosophical premises, and neither they nor their beliefs are disparaged here.”

Other members of the court’s liberal wing joined Sotomayor with similar questions about how else businesses would be able to discriminate if the court were to side with Smith. Justice Ketanji Brown Jackson wanted to know if a photographer, who wanted to take photos of kids with Santa, could refuse to photograph any Black, Asian, or Hispanic children.

“My photographer is speaking by being forced to create photos with minority children,” she said in the hypothetical example.

Justice Samuel Alito, a member of the 6-3 conservative majority on the court, suggested that drawing the line so narrowly could force an Black Santa to take pictures with a child dressed as a member of the Ku Klux Klan.