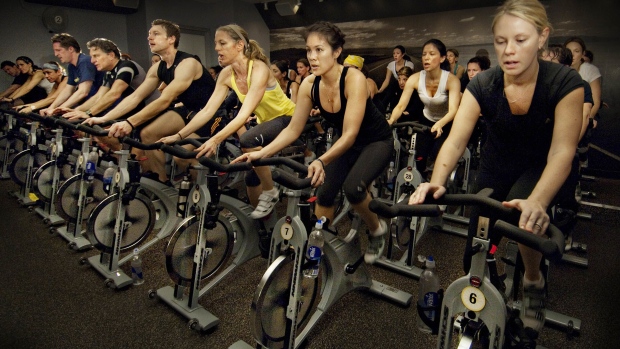 People exercise during a class at a SoulCycle fitness studio. SoulCycle, bought by Equinox in 2011, now has nine locations in New York. , Martine Paris and Carrington York

(Bloomberg) -- Former employees of SoulCycle are taking to social media and trying to raise money for laid-off co-workers after a recent round of studio closures.

Katherine Lutkowski, a Chicago-based instructor who was part of the recent cuts, has been raising money for other employees who lost their jobs after the company said two Chicago studios would soon be shuttered. Lutkowski shared one text she received on her Instagram page. “I literally have to file for unemployment now,’’ a former colleague wrote. “I will not be able to afford bills this month.”

“This is real stuff,” Lutkowski wrote in her post. “We gotta take care of our people.”

The fitness trainer has raised more than $16,000 on her Venmo, which she plans to donate to about 14 laid-off workers, she told Bloomberg News. That’s not a ton of money for a company known for its well-heeled clientele, but it’s a start. SoulCycle, which offers indoor cycling workouts, charges as much as $3,500 for a SuperSoul package that includes advanced booking by a concierge for 50 classes. Lutkowski said donors are a mix of customers and fellow instructors, and that she’ll keep the fundraiser going “as long as it needs to.”

Another ex-staffer expressed dismay at how the layoffs were handled. Instructor Jenny Rose Casto told Bloomberg she was taken off-guard by the announcement. “What we have built here, especially in Chicago, runs deeper than just community,’’ she said.  “It’s family. And for everything to happen so suddenly is a little jarring.”

SoulCycle, part of the Equinox Group of high-end gyms, said in a statement that it’s adjusting to changes in consumer behavior as a result of the pandemic. “We are naturally reevaluating our portfolio of studios to assess whether there is an opportunity to right-size in certain markets,” the company said. “This will allow us to continue to provide riders with the SoulCycle experience they know and love.”

The company is closing about 20 of its 82 studios and laying off 75 of its 1,350 employees, a SoulCycle spokesperson confirmed with Bloomberg. In an audio obtained by Insider, Chief Executive Officer Evelyn Webster told staffers last week that the restructuring was a result of people moving during the pandemic.

The company is closing some of its poshest California locations in San Francisco, Beverly Hills, Newport Beach and Del Mar, Insider reported. Six locations have been reported for New York, including Soho, Park Slope and the Hamptons. Others are in the District of Columbia, Florida, Georgia, Illinois, Massachusetts, Washington and Toronto.

“People will continue to prioritize their health and wellness while being more cost conscious, even trading down to Planet from high-priced gyms,” he said.