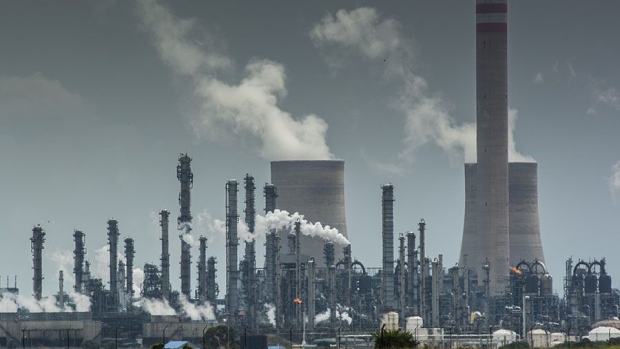 Emissions rise from towers of the Sasol Ltd. Secunda coal-to-liquids plant in Mpumalanga, South Africa, on Monday, Dec. 23, 2019. The level of sulfur dioxide emissions in the Kriel area in Mpumalanga province only lags the Norilsk Nickel metal complex in the Russian town of Norilsk, the environmental group Greenpeace said in a statement, citing 2018 data from NASA satellites. Photographer: Waldo Swiegers/Bloomberg , Bloomberg

The target, known as the country’s nationally determined contribution, is to keep annual emissions at between 371 and 420 megatons of carbon dioxide equivalent by 2030, according to a cabinet statement on Monday. The environment department had earlier recommended a less ambitious target. It comes ahead of the COP26 international meeting on climate change.

The cabinet also said that it approved the submission of the Climate Change Bill to parliament and the replacement of a nuclear research reactor.