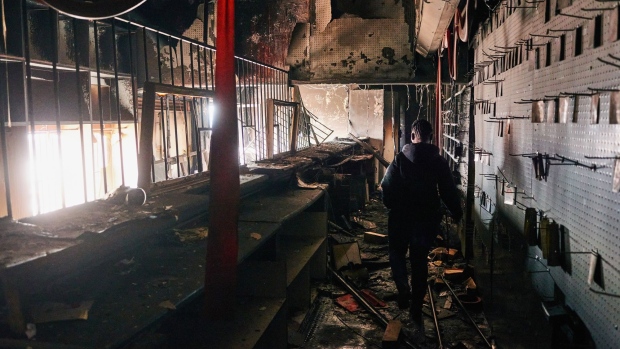 The damaged interior of a burnt-out auto spares store following rioting in the Soweto district of Johannesburg, South Africa, on Thursday, July 15, 2021. Marauding mobs have ransacked hundreds of businesses and destroyed telecommunications towers and other infrastructure, while transport networks and a program to vaccinate people against the coronavirus have been disrupted. Photographer: Waldo Swiegers/Bloomberg , Bloomberg

The steps include reinstating a social-relief grant of 350 rand a month until the end of March, a 400 million-rand government contribution to a relief fund and support for uninsured businesses, President Cyril Ramaphosa said Sunday in a televised speech. The government will also expand an employment tax incentive, he said.

“We have a duty to support those affected by this violence,” Ramaphosa said.

The government imposed stop-start curbs since the pandemic hit in March last year that shuttered thousands of businesses and added to already rampant unemployment. The economy shrank 7% last year, the most in a century last year.

The nation’s misery was compounded by protests that erupted after former President Jacob Zuma was jailed this month on contempt-of-court charges and morphed into a looting spree in which thousands of businesses and street traders were targeted. At least 330 people died in the unrest, which the South African Property Owners Association estimates cost the country about 50 billion rand ($3.4 billion) in lost output and placed 150,000 jobs at risk.

Ramaphosa also announced that South Africa will move to adjusted alert level 3, from alert level 4, after the country passed the peak of a third wave of Covid-19 cases.