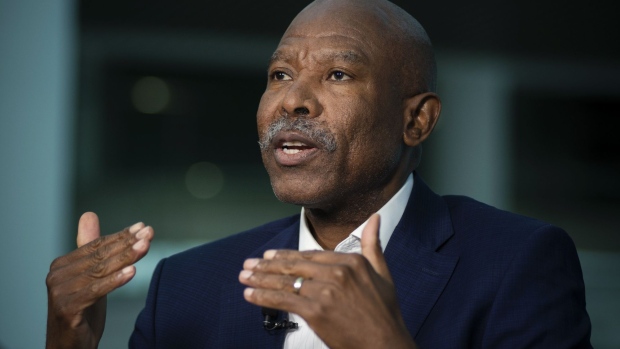 (Bloomberg) -- South Africa’s central bank lifted its benchmark interest rate by three-quarters of a percentage point for a second straight meeting, fully unwinding its extraordinary pandemic-era stimulus measures, and underlined that it remains prepared to act with urgency to curb inflation.

The monetary policy committee raised the repurchase rate to 6.25% from 5.5%, Governor Lesetja Kganyago said Thursday in an online briefing. The move returns the benchmark to its January 2020 level -- before stop-start coronavirus lockdowns and supply-chain disruptions prompted unprecedented easing.

Of the panel’s five members, three voted for the 75 basis-point increase and two preferred a 100-basis-point hike.

While the vote split indicates a more hawkish bias among the panelists, the benchmark is now close to 6.36% -- the implied year-end 2023 rate according to the bank’s quarterly projection model. Kganyago stressed that the model is just a broad policy guide, but it does signal the committee is front-loading its fight against inflation and there may be room to cool the hiking cycle.

South Africa’s rand pared gains after the decision and was 0.7% stronger at 17.6144 per US dollar as of 5.35 p.m. in Johannesburg. Yields on benchmark government debt reversed an initial decline, rising 3 basis points from Wednesday’s close to 10.97%.

Thursday’s move comes after South Africa’s moribund economy contracted in the second quarter and data showed inflation slowed for the first time in seven months. The central bank wants to more firmly anchor inflation expectations close to the 4.5% midpoint of its target range and “to increase confidence of hitting the inflation target in 2024,” Kganyago said.

The SARB has responded quicker and faster than most other central banks to the worst global inflation shock in a generation -- it began raising its policy rate in November and has now increased borrowing costs by 275 basis points. The US Federal Reserve on Wednesday increased interest rates by 75 basis points for a third straight time and signaled even more aggressive hikes.

“If inflation continues to moderate, then the South African Reserve Bank should be able to slow the pace of hiking, but much depends on what the Fed will do during the rest of the year,” said Carmen Nel, an economist and macroeconomic strategist at Matrix Fund Managers. “We would expect a 50-basis-points hike in November, but with the balance of risks tipping toward 25 basis points rather than 75 basis points if the rand stabilizes.”

The SARB’s modeling shows a slight deceleration in headline and core inflation, both of which will now return to the target midpoint in the fourth quarter of 2024.

Sharp rate increases by the likes of the Fed risk eroding the differential that makes local assets attractive to foreign investors and could further weigh on the rand that’s weakened more than 9% against the dollar this year if the Reserve Bank fails to act.

Higher borrowing costs add to the burden on consumers facing a cost-of-living crisis spurred by high food and fuel costs. An index measuring consumer confidence has been negative for 13 consecutive quarters, the longest stretch since the series began in 1982, and Thursday’s rate increase will further weigh on household consumption spending that accounts for about two-thirds of gross domestic product.

The central bank cut its gross domestic product forecast for 2022 to 1.9% from 2%. Risks to the outlook include heightened power outages, a slowdown in the economies of key trading partners, including China, and fears of a global recession.