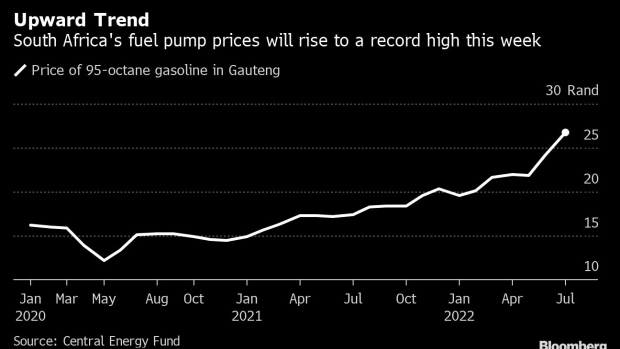 (Bloomberg) -- South Africa’s government confirmed that it will end a temporary reduction in the fuel levy next month as it announced a 10.6% increase in the gasoline price, pushing it to a new record.

The reduction of 1.50 rand ($0.09) in the general fuel levy that applied from April will be trimmed to 75 cents from July 6 and will be withdrawn from Aug. 3, the Department of Mineral Resources and Energy said in an emailed statement Monday. The lower concession for July will add to the impact of higher international fuel costs to boost the retail price of 95-octane gasoline to 26.74 rand in the Gauteng province, the country’s economic hub.

The wholesale price of diesel that’s used in agriculture and for emergency power generation, will rise by as much as 2.31 rand per liter, the department said. The maximum cost of illuminating paraffin, used for cooking and lighting in areas where many people do not have access to electricity, will rise by 2.21 rand per liter.

The increases will place further pressure on household finances and inflation that already breached the top of the central bank’s target band for the first time in five years in May. Fuel has a weighting of almost 5% in South Africa’s consumer price basket.

Gasoline retail costs have surged by 36% since the start of the year, increasing calls by opposition parties and labor groups for the government to deregulate the price. However, the Fuel Retailers Association has warned such a move could result in making it even more expensive for consumers.