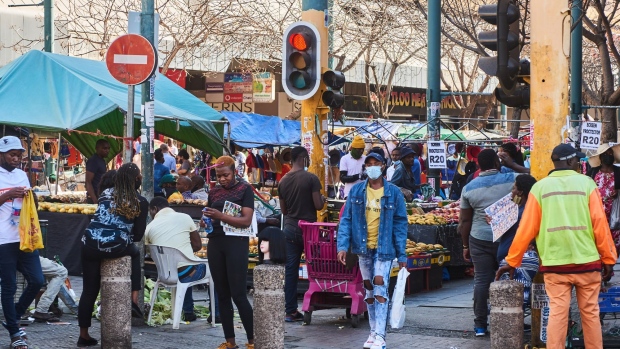 Shoppers walk through a market in the central business district (CBD) of Pretoria, South Africa, on Tuesday, Sept. 14, 2021. South Africa's government met Tuesday to discuss how to accelerate the country's economic recovery and consider the most feasible way to provide further welfare grants. , Bloomberg

(Bloomberg) -- South Africa may announce more stringent lockdown measures in coming days to curb a resurgence of coronavirus infections and the spread of a new variant, people familiar with the matter said.

The National Coronavirus Command Council met Saturday to discuss possible measures, while weighing the impact any moves will have on the economy, said the people, who asked not to be identified because the talks aren’t public.

Among the options being considered are ways to try and boost the nation’s vaccination rate, they said.

Tyrone Seale, spokesman for President Cyril Ramaphosa, declined to comment beyond a statement issued on Friday in which the presidency said that the outcome of the NCCC meeting will help determine whether further consultations are required at the level of the President’s Coordinating Council..

South African scientists this week identified the new variant, known as omicron, setting off alarm bells around the world. The U.K. led nations in introducing travel bans on South Africa and its neighbors, posing a threat to the nation’s tourism industry, which accounts for 7% of economic output. The European Union, U.S. and much of the world has followed.

Only about a third of South African adults are fully vaccinated against the coronavirus.

The number of new coronavirus cases more than tripled this week to 2,465 on Friday, according to the Health Department. The proportion of positive tests rose to 9.2% from 6.5% a day earlier, National Institute for Communicable Diseases data shows.