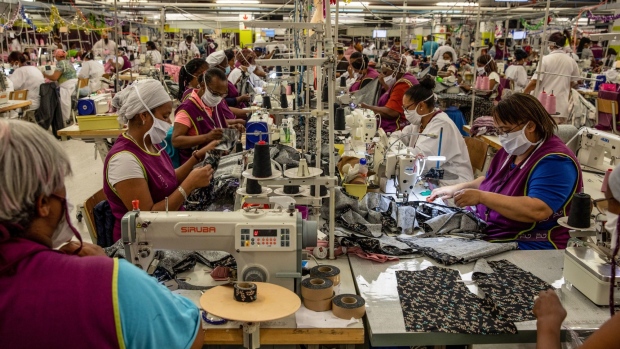 Workers sew garments on machines at the Prestige Clothing (Pty) Ltd. textile factory, operated by The Foschini Group Ltd., in the Maitland district of Cape Town, South Africa, on Thursday, Dec. 10, 2020. South African retailers including The Foschini Group and Woolworths Holdings Ltd. are increasing investment in local clothing manufacturers -- both to reduce a dependency on Chinese imports and secure a supply chain thrown into disarray by Covid-19 restrictions. Photographer: Dwayne Senior/Bloomberg , Bloomberg

The number of people employed by manufacturers rose by 123,000 to 1.63 million in the three months through September, Statistics South Africa said in a report released Tuesday in the capital, Pretoria. The official unemployment rate declined to 32.9%, the third highest on a global list of 82 countries and the eurozone monitored by Bloomberg.

Jobs in the sector grew even as Eskom Holdings SOC Ltd., which produces most of the nation’s electricity, imposed power outages on more than half of the days in the third quarter, leading to a record 173 days of blackouts so far in 2022, according to Bloomberg calculations.

Output from the manufacturing sector, which accounts for about 13% of gross domestic product, was better than expected in the third quarter, according to data published earlier this month. A gauge measuring factory sentiment due Thursday will provide clues on the industry’s performance in the final three months of 2022.