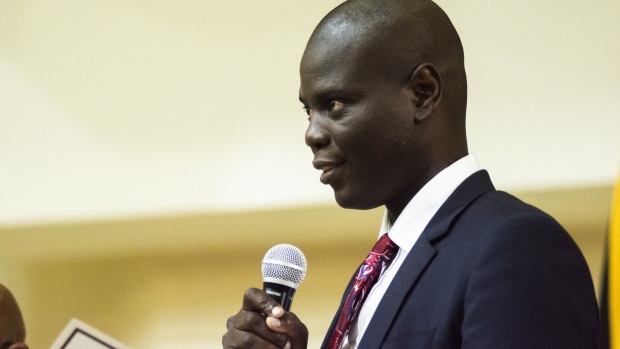 Ronald Lamola, South Africa's justice minister, speaks during a swearing-in ceremony in Pretoria, South Africa, on Thursday, May 30, 2019. Now that South Africa's cabinet has been announced, the rand may join its emerging-market peers in being whipsawed by a trade war that has subdued markets worldwide. , Bloomberg

(Bloomberg) -- South Africa’s government criticized the United Arab Emirates for failing to cooperate with its requests for assistance in bringing to justice people suspected of being involved in corruption.

The two nations have finalized and ratified extradition and mutual legal assistance treaties that may signal a change of course by the U.A.E. authorities, Justice Minister Ronald Lamola said Friday in an online briefing.

“We have to date not experienced the level of appreciation and cooperation” from the U.A.E., Lamola said in a statement. “We will continue to pursue our counterparts through diplomatic channels, in order to reach the desired levels of cooperation to enable our law enforcement agencies to bring to justice persons of interest on any investigation they are pursuing.”

South Africa asked the U.A.E. three years ago for assistance in gathering financial evidence related to the Gupta family, who’ve been accused by the authorities of using their links with former President Jacob Zuma to secure deals to loot state-owned companies. President Cyril Ramaphosa has estimated that more than 500 billion rand ($37 billion) was stolen from the state during Zuma’s rule.