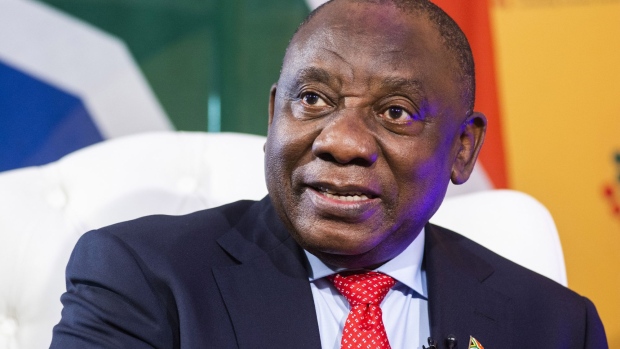 Cyril Ramaphosa, South Africa's president, speaks during a Bloomberg Television interview during the South African Investment Conference in Johannesburg on Wednesday, Nov. 18, 2020. South Africa has drawn a line on debt and will bring it down, Ramaphosa said. Photographer: Waldo Swiegers/Bloomberg , Bloomberg

Public Protector Busisiwe Mkhwebane’s office received a complaint about the alleged breach this week, the state agency said in a statement on Thursday. It didn’t provide further information on the alleged breach.

“In terms of the Executive Members Ethics Act, the Public Protector must investigate any alleged breach of the code on receipt of a complaint,” the office said. The investigation must be completed within 30 days, it said.

The announcement of the investigation comes two days after a parliamentary committee said it will ask Ramaphosa to explain recorded comments in which he allegedly said the ruling party misused taxpayer money for election campaigning. Mkhwebane, who is seen to be an ally of former President Jacob Zuma, is facing a parliamentary probe into whether she should be removed from office on grounds of misconduct, incapacity or misconduct.