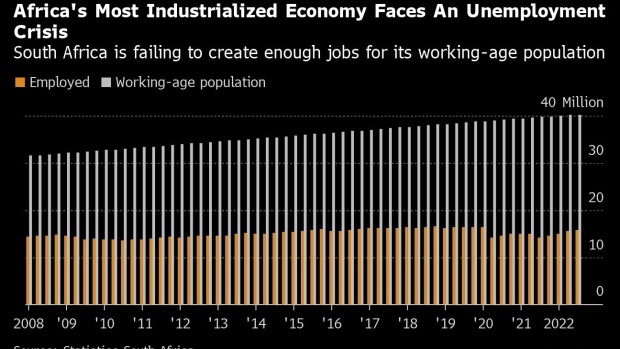 Commuters wearing protective face masks wait to cross Strand Street outside the 'Cape Town Station' Metrorail Station in Cape Town, South Africa, on Monday, Jan. 11, 2021. The pandemic and restrictions imposed to contain it have devastated Africa's most industrialized economy, and the extension of curbs that came into effect at the height of the holiday season bode ill for efforts to engineer a rebound. Photographer: Dwayne Senior/Bloomberg , Bloomberg

The official jobless rate decreased to 32.9% in the three months through September from 33.9% in the previous quarter, Statistics South Africa said Tuesday in a report released in the capital, Pretoria.

The improvement means South Africa’s jobless rate now trails Namibia and Nigeria on a list of 82 countries and the eurozone monitored by Bloomberg, though some data are outdated. It held the record from the second quarter of 2021.

Still, unemployment according to the expanded definition stood at 43.1%, which includes people who were available for work but not looking for a job, compared with 44.1% in the June quarter.

South Africa’s manufacturing, trade and construction were among the biggest contributors to the increases in job. That’s despite intense blackouts that crippled businesses and economic activity.

Africa’s most industrialized economy is suffering an energy crisis as power utility Eskom Holdings SOC Ltd., which produces almost all of the nation’s electricity, struggles to meet demand. The state-owned company imposed power outages on more than half of the days of the third quarter, leading to a record 173 days of blackouts so far in 2022, according to Bloomberg calculations.

The official jobless rate in Africa’s most industrialized economy has exceeded 20% for at least two decades. That’s largely due to sluggish economic growth, and strict labor laws and bureaucratic hurdles that have weighed on the ability of local companies to hire additional workers. Analysts also cite an education system that doesn’t provide adequate skills and apartheid-era spatial planning that makes it difficult for job seekers to enter and remain in the formal workforce. The jobless rate for people aged between 15 and 24, which includes school leavers and graduates of universities and training colleges, stands at 34.5%.

The governing African National Congress failed to meet its targeted unemployment rate of 14% by 2020. The goal was part of its 2012 National Development Plan, the fifth economic blueprint formally adopted since it came to power almost three decades ago. President Cyril Ramaphosa, who is expected to win a second term as party leader, next month will be expected to champion job creation initiatives.

Joblessness, rising food and fuel prices and an aggressive interest-rate hiking cycle pose a threat to social stability in an economy at risk of recession and that’s still reeling from several Covid-19 lockdowns and deadly riots in 2021. South Africa is one of the most unequal countries in the world, and 14 million people out of a population of 60 million are experiencing food poverty, the World Bank said in an April 2020 report.

Government corruption, known locally as state capture, became endemic during former President Jacob Zuma’s rule, weighing on the state’s ability to create jobs and support the vulnerable. Zuma, who quit in 2018 under pressure from the ruling party, has repeatedly denied wrongdoing.

Persistently high unemployment will also complicate efforts to reduce fiscal deficits and debt, with the government considering widening the welfare net in a country where almost half of the population receives at least one social grant. South Africa will spend 243 billion rand, or almost 4% of gross domestic product on welfare, in the current fiscal year, with most of the money going toward child support and pensions, the medium-term budget shows.

--With assistance from Simbarashe Gumbo and Rene Vollgraaff.