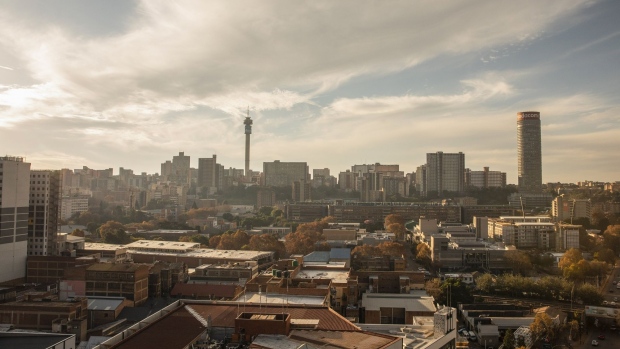 Commercial properties, residential buildings and skyscraper offices, including the Hillbrow Tower, left, and the Ponte Tower, right, on the skyline viewed from a rooftop bar in Johannesburg, South Africa, on Thursday, May 21, 2021. Traders raised bets that South Africa’s central bank will tighten policy this year after inflation accelerated more than expected, resulting in a negative real interest rate for the first time in more than five years. Photographer: Guillem Sartorio/Bloomberg , Bloomberg

(Bloomberg) -- South Africa has banned Bain & Co. from bidding for public-sector contracts for a decade, following the lead of the UK, after the consulting firm was accused of helping government officials degrade the African country’s revenue service’s ability to probe tax evasion.

South Africa’s National Treasury said in a response to queries that the ban will last for a decade and relates to the company “engaging in corrupt and fraudulent practices related to a South African Revenue Service contract.” The UK in August banned Bain from public contracts for three years because of allegations related to the tax agency in the African country.

Bain was found by a judicial commission to have had ties to illegal dealings during work restructuring SARS, where senior staff were ousted and the institution’s investigative capacity was gutted.

Last month, Stephen York, the firm’s managing partner in South Africa, said it was “ashamed” of its work at the tax agency in a full-page newspaper advert. He said some of the allegations made against Bain were untrue.

We deeply regret the mistakes made in the procurement and execution of Bain South Africa‘s work with SARS between 2015 and 2017,” the company said in a response to a query on Thursday. “We are embarrassed that this could have occurred in the first place and are angry that our work was used by others to damage a critical institution and South Africa.”

The fees earned by Bain have been repaid to SARS, Bain said. Bain disagrees with the ban and was given no notice of its implementation or opportunity to respond to it, it said.

Bain is one of a number of international companies that have acknowledged playing a role in misconduct at state companies during former South African President Jacob Zuma’s rule, during which funds were funneled out to private entities in a practice known locally as state capture. McKinsey & Co., SAP SE, KPMG LLP and ABB Ltd. have all accepted responsibility for improper work and in some cases paid back fees. Zuma has denied wrongdoing.

(Updates with Bain comments in fifth and sixth paragraphs)