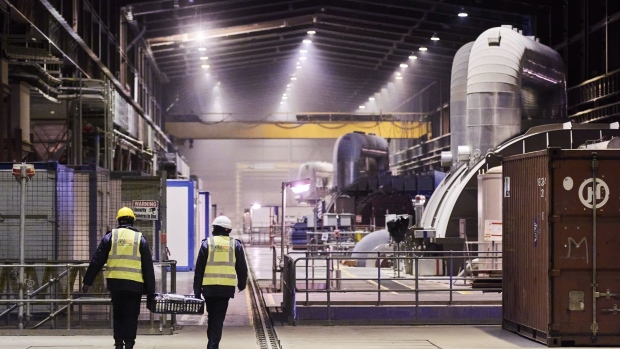 Workers near generators in the turbine hall at the Kusile coal-fired power station, operated by Eskom Holdings SOC Ltd., in Delmas, Mpumalanga province, South Africa, on Wednesday, June 8, 2022. The coal-fired plant’s sixth and last unit is expected to reach commercial operation in two years, with the fifth scheduled to be done by December 2023. , Bloomberg

(Bloomberg) -- Eskom Holdings SOC Ltd., South Africa’s embattled power utility, will resume wage talks with workers on Tuesday after proposing a 7% wage hike to end an impasse that plunged the continent’s most industrialized nation into its worst blackout since 2019.

Eskom proposed a 7% increase for the year in a Friday meeting and talks will resume on July 5, an Eskom spokesman said in a response to a text message Saturday.

Unions are discussing the offer made during the 12-hour meeting, the National Union of Metalworkers of South Africa, or Numsa, one of Eskom’s biggest labor groups, said in a statement.

“We understand that the entire country is watching these talks with keen interest,” the union said. “There is a lot of pressure for us to give a response right away.”

Eskom, which has 42,000 employees, says the impasse has forced it to remove 6,000 megawatts of demand for three days this week, the deepest power cuts since 2019. Bloomberg reported earlier this week that Eskom would offer a 7% wage increase for one year, on a sliding scale. Eskom’s unions wanted a 12% increase across the board.