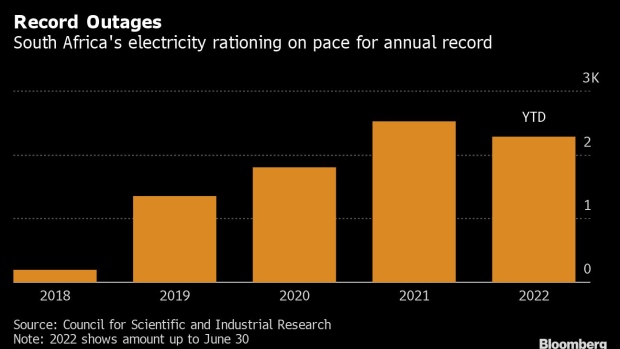 (Bloomberg) -- South Africa’s crippling power cuts are approaching an annual record, and there are still six months to go.

Spurred by an illegal strike this week that added to its woes, utility Eskom Holdings SOC Ltd. has already implemented controlled blackouts equal to more than 90% of the energy it shed for the whole of 2021, according to the Council for Scientific and Industrial Research.

The power company has cut 2,276 gigawatt hours of electricity in 2022 versus the current-record 2,521 gigawatt hours last year, the state-owned researcher said. Eskom switches off supply to large swathes of the country to avoid a total collapse of a grid fed by aging and unreliable, mostly-coal, plants prone to tripping.

Protests that started last week after a deadlock in wage negotiations have exacerbated the situation, deepening outages to so-called Stage 6 -- removing 6,000 megawatts of demand -- for the first time since the only other time it occurred, in 2019.

Eskom this week cut more than four times the amount of energy at Stage 6 than it did previously, according to CSIR.