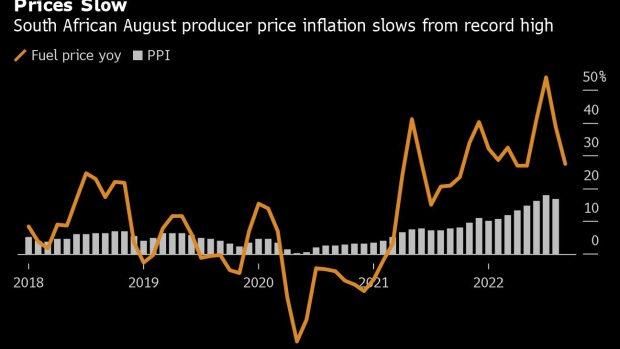 Workers sew garments on machines at the Prestige Clothing (Pty) Ltd. textile factory, operated by The Foschini Group Ltd., in the Maitland district of Cape Town, South Africa, on Thursday, Dec. 10, 2020. South African retailers including The Foschini Group and Woolworths Holdings Ltd. are increasing investment in local clothing manufacturers -- both to reduce a dependency on Chinese imports and secure a supply chain thrown into disarray by Covid-19 restrictions. , Bloomberg

The cost of final manufactured goods climbed 16.6% in August, compared with a nine-year high of 18% a month earlier, according to data published Thursday by Statistics South Africa. The rate was lower than the 17.5% median estimate of eight estimates in a Bloomberg survey. Prices fell 0.5% in the month.

Domestic fuel prices have dropped for the past two months, after reaching a record in July on the rise in global crude prices stemming from Russia’s war with Ukraine. The cost of food products, beverages and tobacco products increased slightly in the month, while prices for chemicals, rubber and plastic products fell.

Gasoline and diesel price cuts in September may be followed by a further decline in the gasoline price next month, on the back of the lower global oil price,” Investec Bank Ltd. Economist Lara Hodes said in a research note.

“Producer price inflation appears to have peaked in line with easing global price pressures, which have helped to moderate local fuel prices and food inflation,” Nedbank Ltd. said in a research note.

The producer-inflation data comes after consumer inflation slowed in August, after reaching the highest rate in more than a decade in July. The South African central bank said last week it expects inflation to peak in the third quarter and average 6.5% this year.