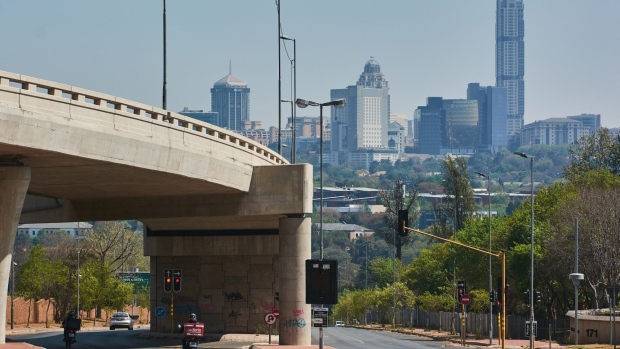 Skycraper buildings in the in the central business district (CBD) beyond the Sandton area of Johannesburg, South Africa, on Tuesday, Sept. 14, 2021. South Africa's government met Tuesday to discuss how to accelerate the country's economic recovery and consider the most feasible way to provide further welfare grants. Photographer: Waldo Swiegers/Bloomberg , Bloomberg

(Bloomberg) -- South Africa’s government rejected demands from labor unions representing 1.3 million state workers for 10% raises and increased housing allowances and other stipends, instead proposing that it extend the payment of an additional 1,000 rand ($63) monthly cash stipend by a further year.

Acceding to the unions’ proposals will cost 146 billion rand over three years, which isn’t affordable, the government said in a submission to the public sector bargaining council, which was seen by Bloomberg. It also rejected demands for contract workers to be permanently employed.

Remuneration accounts for almost a third of total government expenditure, and keeping it in check is key to the National Treasury’s plans to rein in the budget deficit and bring runaway state debt under control. The unions have argued that inflation-beating increases are warranted in light of soaring food and energy costs. The annual consumer inflation rate is currently 5.9%.

The February budget provided for total compensation to grow by an annual average of 1.8% for the next three years and made no additional provision for wage increases beyond a 20.5 billion rand allocation in the 2022-23 fiscal year to cover the cost of an interim pay deal struck last July. That single-year accord provided for civil servants to receive 1,000 rand monthly payments in addition to their salaries -- a concession the government proposed extending until the end of March 2023.

The government agreed to a union request to negotiate another single-year pay deal on condition that talks are concluded by next month.

The state’s offer amounted to a total increase of 1.5% to 2%, and it still needs to clarify how the money will be allocated and whether the gratuity will be a one-off or be added to workers’ base-line pay, said Claude Naiker, a spokesperson for the Public Servants Association, which represents more than 230,000 state workers.

“Basically all the demands that we had set up in our proposal, none of them have been met by the employer,” he said. “What we have done now is we have taken the proposal to workers and our next meeting will be in the latter part of May” where the state will provide further details of its pay offer, he said.