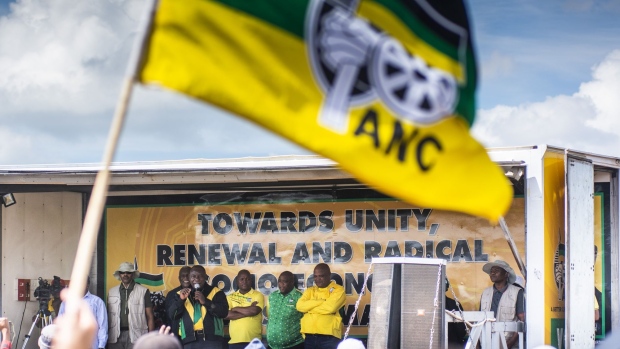 Cyril Ramaphosa, South Africa's president, speaks during an African National Congress party (ANC) campaign event in Bloemfontein, South Africa, on Sunday, April 7, 2019. The ANC is expected to easily maintain its monopoly on power in the May 8 national elections, albeit with a slightly reduced majority. , Bloomberg

(Bloomberg) -- The top leadership of South Africa’s ruling party is set to meet on Thursday for the first time since President Cyril Ramaphosa became embroiled in a scandal over foreign currency that was stolen from his game farm.

The gathering of the African National Congress’s national executive committee, its highest decision- making body, will also be its first since a panel that’s been probing graft issued its final report, which made scathing findings against the party and criticized Ramaphosa for failing to speak out about corruption during his predecessor Jacob Zuma’s rule.

Former spy boss Arthur Fraser this month alleged that $4 million was stolen from Ramaphosa’s farm in 2020, that the crime wasn’t properly reported to the police and those involved were illegally detained and interrogated.

Ramaphosa confirmed that money he made from selling animals was taken but far less than Fraser alleged, denied wrongdoing and offered to go before the party’s integrity commission to explain what transpired.

With Ramaphosa expected to seek a second term as party leader in December, his detractors in the party may use the NEC meeting to question his fitness to hold office.

While the ANC’s rules specify that officials who face prosecution must resign their posts, law enforcement officials haven’t disclosed whether they intend charging the president.