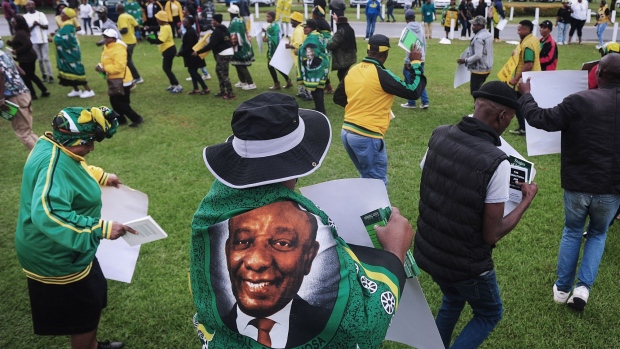 A supporter of Cyril Ramaphosa, South Africa's president, wears a flag bearing his image outside a gathering of African National Congress (ANC) leaders in Johannesburg, South Africa, on Monday, Dec. 5, 2022. Ramaphosa’s lawyers will challenge an advisory panel’s report that said there may be grounds for his impeachment, as the governing party’s top leaders hold a crucial meeting on how to respond to the damning findings. , Bloomberg

(Bloomberg) -- South Africa’s governing party will consider investigations by its ethics body, including two into separate scandals that have embroiled President Cyril Ramaphosa and former Health Minister Zweli Mkhize, at its elective conference next week.

The decision to defer consideration of the reports was taken by the African National Congress’s National Executive Committee at a meeting on Friday, party spokesman Pule Mabe said. Ramaphosa and Mkhize are running against each other for leadership of the party at a five-yearly conference that begins on Dec. 16.

Under rules approved in July, any ANC member that the integrity committee has recommended should step aside is barred from running for party leadership positions. In instances where members feel the panel has acted unfairly, the matter is then reconsidered by the NEC before a final decision is taken, Treasurer-General Paul Mashatile said in an interview last week.

The ethics panel investigated Ramaphosa’s handling of the theft of at least $580,000 from a sofa at his game farm in 2020, and Mkhize’s involvement in the awarding of government contracts to a company that was run by his former aides and paid for renovations to his house. Both deny wrongdoing.