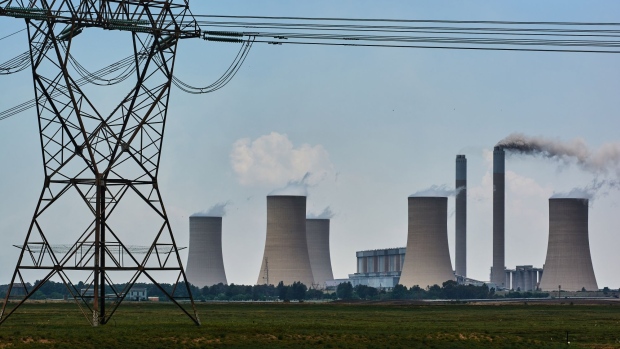 A electricity transmission tower close to the Eskom Holdings SOC Ltd. Lethabo coal-fired power station in Vereeniging, South Africa, on Friday, Nov. 5, 2021. South Africa’s coal-dependent power utility will rely on government and development finance for “the important” funding for a transition to cleaner sources of energy, according to its top official. Photographer: Waldo Swiegers/Bloomberg , Bloomberg

The Energy Intensive Users Group, which accounts for about 40% of the nation’s power consumption, wants “stable and predictable tariff increases to promote medium- to long-term investment planning,” it said in a presentation to the regulator on Friday. Public hearings have taken place this week over a proposal by state-owned utility Eskom Holdings SOC Ltd. to raise its fees by 21% for the 2022-23 financial year.

South Africa over the last two decades has gone from having a surplus of cheap electricity to contending with an unreliable supply. Eskom’s coal-powered plants have been poorly maintained and prone to breakdowns, resulting in nationwide power cuts. The utility has said cost-reflective prices are needed to turn the loss-making business around.

Eskom and the National Energy Regulator of South Africa, which sets the electricity prices have sparred off several times in court over its determinations. Some costs have jumped more than 30% since 2009, although they have rarely reached double digits in recent years.

The EIUG proposed that the consumer inflation rate plus 2 to 4 percentage points would be a reasonable annual tariff hike. It also asked the regulator to consider proposing incentives for Eskom to improve its power supply.