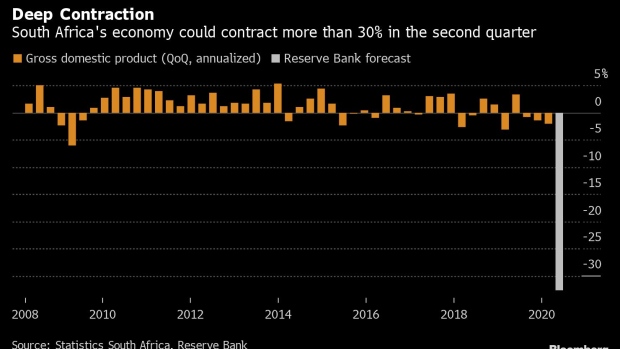 Trash pickers pull a cart past a mural in the Alexandra township of Johannesburg, South Africa, on Thursday, June 11, 2020. The near-decade of mismanagement and corruption under former President Jacob Zuma combined with the coronavirus outbreak and loss of South Africa’s investment-grade rating have left the economy in its worst state in the democratic era. Photographer: Waldo Swiegers/Bloomberg , Bloomberg

South Africa’s economy probably contracted more than 30% in the second quarter when restrictions to curb the spread of the coronavirus shuttered almost all activity for five weeks, according to central bank forecasts.

The annualized drop in gross domestic product is forecast at 32.6% for the three months through June from the previous quarter, the Pretoria-based Reserve Bank said in an emailed response to a query. That would be the deepest quarterly decline since at least 1990. The central bank’s projection in its annual report that was released on June 29 shows the economy will expand on a quarterly basis in the three months through September, which means the technical recession will be over.

The economy contracted an annualized 2% in the three months through March, the first time since 2009 that a South African recession has lasted longer than two quarters. The slump was less than projected and economists including Kevin Lings of Stanlib Asset Management warned that the fall-off in the second quarter will be severe.

South Africa implemented a strict lockdown from March 27 to limit the spread of the pandemic. For five weeks, almost all activity except essential services was halted and most citizens were only allowed to leave their homes to buy food, seek medical care and collect welfare grants.

The restrictions were eased from May 1, allowing the phased reopening of some businesses and industries. Still, many companies have closed down permanently and some of those that have resumed operations are still limited as to which services they may offer.

The Reserve Bank sees the economy contracting by 7% this year and the National Treasury projects a 7.2% decline in output. That would be the most since the Great Depression, when GDP fell by 6.2% in 1931. The near-term economic outlook is highly dependent on the development of the coronavirus pandemic and the extent of restrictions on business activity to limit the spread, the central bank said in an annual report.