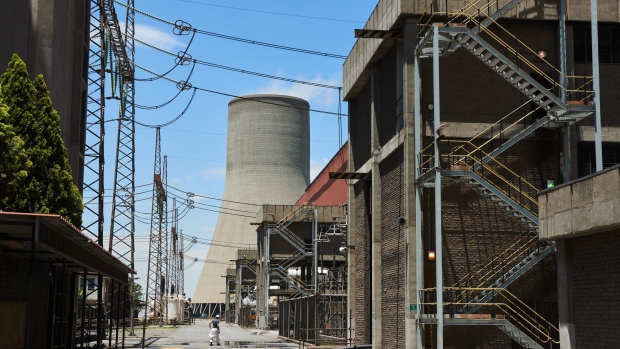 A cooling tower at the Eskom Holdings SOC Ltd. Tutuka coal-fired power station in Mpumalanga, South Africa, on Thursday, Nov. 18, 2021. South Africa's energy department has said it will start preparing for the end of coal-for-power use in the country but cautioned that a retreat from the dirtiest fossil fuel must take account of the impact on the economy and the people who depend on it for a living. , Bloomberg

(Bloomberg) -- South Africa’s Eskom Holdings SOC Ltd. filed charges with police over an incident of sabotage at the Tutuka power station, another obstacle as the utility struggles to meet electricity demand.

The most industrialized nation on the continent has been undergoing regular power cuts with a system run by Eskom that’s prone to breakdowns. In addition to the challenges posed by aging infrastructure, a cable was severed and a pipe cut at the coal-burning plant 170km (106 miles) southeast of Johannesburg this week as workers prepared to return a unit to service, the utility said Thursday in a statement.

“Eskom believes these were deliberate acts of sabotage by someone who had access to the site where only employees have access,” it said. It’s the fifth incident of sabotage since March 2021, all of which have been reported to the police.

The utility has investigated earlier incidents and has increased security. South Africa is on pace to experience record power cuts this year. As much as 6,000 megawatts of new generation will be needed to reach a stable power supply, Eskom has said.